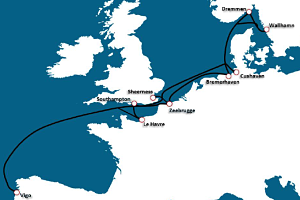 The company said the new service provides a route from Vigo in Spain to Drammen in Norway and Wallhamm in Sweden. The company will deploy three vessels on the route over two loops.

“UECC is the only shortsea provider offering such a convenient route and we have received very positive feedback on this,” said Helen Bjerke, head of trade and operations at UECC. She pointed out that the route has capacity available in particularly for the southbound route.

LNG vessels deployed in the BalticIn other news, UECC has announced the deployment of its new dual-fuel LNG pure car and truck carriers (PCTCs) on its weekly Baltic Service, which now includes Sweden’s Malmö port in the loop.

Naming ceremonies were held for the two ships in November last year (M/V Auto Eco) and in February (M/V Auto Energy). They are the world’s largest dual fuel LNG (liquid natural gas) PCTCs are ready to trade in the Baltic.

Bjorn Svenningsen, UECC’s head of sales and marketing said: “These are the first in the world and they are fitted with a dual-fuel LNG propulsion system, allowing them to complete a 14-day round trip on LNG without refuelling.”

UECC ordered the dual-fuel PCTCs from Kawasaki Heavy Industries (KHI) back in 2014, and their deployment has been a significant first for the car-shipping segment. They have capacity for approximately 4,000 standard-sized cars spread over 10 decks, as well as significant loads of high and heavy vehicles.

According to Svenningsen, they have ice-breaking capability that ensures they remain in service year round.