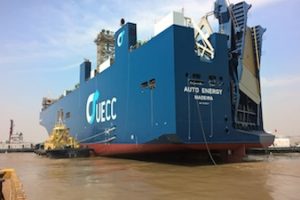 Both vessels were officially launched at the Nacks shipyard in Nantong, China, where they were built. They can carry approximately 3,800 standard-sized cars over 10 decks, as well as significant loads of high and heavy vehicles. They are in the 1A super Finnish/Swedish ice class and can complete a 14-day round voyage in the Baltic using solely liquefied natural gas (LNG) for the main engine and auxiliary power generation.

“It is a ground-breaking moment, seeing our second LNG PCTC [pure car and truck carrier] vessel – one of the most technically advanced PCTC has ever built – on the water,” said Thomas Ekhaugen, head of fleet and cargo handling at UECC. “After the successful launch of the sister vessel earlier, we have been looking forward to this day as well.”

As with her sister vessel, the TBN Auto Energy will now undergo engine performance trials at sea using LNG before final delivery to UECC on November 28th this year. Its sister vessel TBN Auto Eco has already completed its first one-week sea trial, which UECC has reported was a success.

The use of LNG significantly reduces CO2 and nitrogen oxide emissions, as well as almost eliminating sulphur oxide and particulate emissions.

“We are extremely proud that UECC is being a technological pioneer with those new unique vessels and we will be raising the quality bar on transportation with them,” said Bjørn Svenningsen, head of sales and marketing at UECC. “With these vessels trading in our fixed liner network in Europe next year, we will be enhancing the service to our customers with exceptional efficiency, reliability and reduced carbon footprint.”