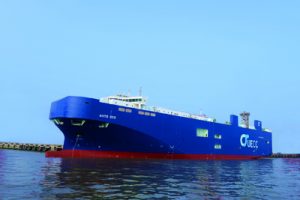 Short-sea car carrier UECC has taken delivery of its first dual-fuel vessel, the TBN Auto Eco, following ocean trials to test the vessel’s operation on liquefied natural gas (LNG). The vessel was completed at the Nacks shipyard in Nantong, China in April this year while a second vessel, the TBN Auto Energy, has also been completed.

UECC ordered the pure car and truck carriers (PCTCs) from Kawasaki Heavy Industries (KHI) back in 2014 for delivery this year.

The vessels were jointly developed with KHI, UECC, Wallenius Marine and NYK Technical Group. They will be able to carry approximately 3,800 standard-sized cars spread over 10 decks, as well as significant loads of high and heavy vehicles.

As with its sister vessel, the TBN Auto Eco is capable of running on LNG fuel or heavy fuel oil and marine gas oil, which the UECC said allowed it to combine cleaner operations with greater flexibility and efficiency. The vessels will be able to complete a 14-day round voyage in the Baltic region using solely LNG fuel.

European regulations now in force in the Baltic (along with the North Sea and English Channel) restrict the sulphur content of bunker fuel used by vessels to 0.1%. LNG significantly reduces CO2 and nitrogen oxide (NO2) emissions, as well as almost eliminating sulphur oxide (SOx) and particulate emissions.

At a ceremony held to mark the delivery of the first vessel, Glenn Edvardsen, CEO of UECC, said the company was proud of the ship built by the Nacks shipyard.

“We look forward to showing the world and the shipping industry that we are the game-changer with the addition of this marvellous advanced PCTC [pure car and truck carrier] with LNG dual-fuel technology – the first in the world,” he said. “We sincerely thank Nacks for all the hard work for the past year.”

TBN Auto Eco is only a working name for the vessel; an official naming ceremony will be held in Zeebrugge in late November.