​UECC to reintroduce ro-ro service in Turkey and Russia 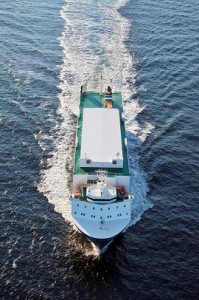 United European Car Carriers (UECC) is to launch a regular ro-ro liner service between major ports in Turkey and Russia starting this September.

The service will transport cars and vans, as well as high-and-heavy cargo. It will make weekly calls at the ports of Derince in Turkey and Novorossiysk in Russia, and will provide enhanced services for logistics providers across the Black Sea. Besides its weekly service between the two ports, there are also plans to schedule stop-off inducement calls to other ports in the central and northwestern parts of the Black Sea.

The move reflects an improvement in the short-sea shipping company’s performance in the wider region, following its exit from the Black Sea in 2009 and subsequently suffering sales within the European market.

Bjorn Svenningsen, the head of UECC’s car transport sales department, said that the investment came in response to growing demands in both the Turkish and Russian car manufacturing markets. He also cited the “potential flow of trucks into Turkey” for the Russian market. He was unable at this time to comment on the carmakers in question that will make use of the new service provided.

UECC now carries out short-sea vehicle shipping within 70 different ports, and its 23 purpose-built vessels make over 3000 port calls each year.

A successful trial shipment has been completed in advance of the facility’s opening on September 6th.