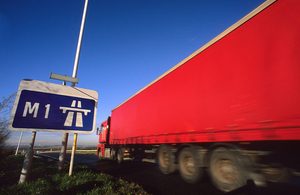 The trial, which will be carried out by the UK’s Transport Research Laboratory, will involve up to three heavy goods vehicles travelling in convoy, with acceleration and braking controlled by the lead vehicle. All trucks in the platoon will have a driver ready to take control at any time. Funding for the trial will be provided by the Department for Transport and Highways England.

There has been significant interest in platooning over the last few years, as the practice has the potential to save significant amounts of fuel due to the lower air drag at the rear, plus the front truck reduces its fuel usage by 5-10%.

Jim O’Sullivan, CEO of Highways England said the trial had the potential to demonstrate how the greater automation of vehicles, in this instance, HGVs, could improve safety, make journeys better for road users and reduce in-vehicle emissions.

The European automotive manufacturers' association (ACEA) has also provided a roadmap for EU-wide truck platooning calling for a wide range of regulatory change as well as upgrades to EU roads.

The new trial follows a government-funded feasibility study to examine the benefits and viability of platooning. It will be carried out in three phases, with the first focusing on the potential for platooning on the UK’s major roads.

Initial test track-based research will help decide details such as distance between vehicles and on which roads the tests could take place, according to a government statement.

“Mobile connectivity has played a large role in this and more and more transportation services are starting to require always-available connectivity to enable greater productivity, management and customer experience for passengers,” said Hubert Da Costa, vice-president of EMEA at Cradlepoint, a provider of cloud-based wired and wireless networking solutions for enterprises.

“Due to the advances in technology, connectivity can now be maintained in even the most challenging of environments, from police cars and ambulances to mass transit fleets.”