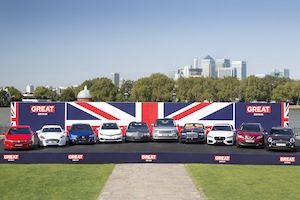 The UK exported a record number of vehicles in 2015 – at more than 1.2m – equal to more than 77% of the country’s total production for the year, which stood at more than 1.5m units according to figures from the Society of Motor Manufacturers and Traders (SMMT). That production figure was the highest since 2005.

Europe now accounts for 57.5% of all UK exports thanks to the economic recovery in the region. That has helped to compensate for a fall in demand from China and Russia, which have seen drops of 37.5% and 70% respectively.

“Europe is our biggest trading partner and the UK’s membership of the European Union is vital for the automotive sector in order to secure future growth and jobs,” said Mike Hawes, CEO of SMMT.

“Despite export challenges in some key markets such as Russia and China, foreign demand for British-built cars has been strong, reaching record export levels in the past year,” said Hawes. “Achieving these hard fought for results is down to vital investment in the sector, world class engineering and a committed and skilled UK workforce – one of the most productive in the world.”

Commercial vehicle exports, meanwhile, accounted for half of UK production, which reached almost 95,000 units. UK and overseas demand saw growth by more than 31% in the sector said the SMMT.

“Commercial vehicle production ended 2015 on a very positive note, with another month of growth in December resulting in a substantial boost to volumes for the year,” said Hawes. “Exports continued to make up half of UK CV demand, with more than 47,000 vehicles destined for overseas, fuelled by the continued recovery of our biggest market, Europe.”

The UK’s engine production also benefitted by overseas demand. While engine production remained steady in 2015 with more than 2.3m units manufactured, (-1.1% on 2014), exports accounted for 64% of that output.

“Whilst engine production remains steady in the UK, with figures down just 1% compared to average annual production since 2009, the continued growth of the export market underlines the importance of demand from overseas,” said Hawes. “Over 1.5m engines – 64% of total production – were exported in 2015, with the split between petrol and diesel almost equal.”