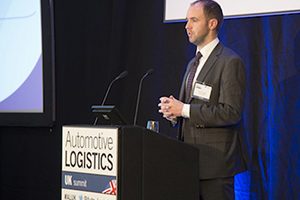 The freight, utilities and logistics industry in the UK contributes 31% of the total emissions polluting the environment and threatening the health of country's population but the good news is that trials are already underway on low emission goods vehicles, thanks to £24m ($32m) in funding through the government's innovation agency, Innovate UK.

Speaking at this week's Automotive Logistics UK summit, David Tozer (pictured), programme manager for automotive at the agency, explained that 20 projects were currently underway aimed at moving freight using low emission vehicles. He highlighted three to show how much progress was being made.

The projects are varied. One, called HyTime (Hyrodgen Truck Implementation for Maximum Emissions reduction), aims to prove it is possible to reduce tailpipe carbon emissions by 40-70% by displacing diesel. That project has received funding of more than £1.3m.

Another project supported by Innovate, with £2m funding behind it, is aimed at maximising the benefits of using compressed natural gas (CNG) in freight vehicles. This includes a trial of 43 dedicated heavy goods vehicles (HGVs) for the John Lewis partnership, which are fuelled by CNG, to demonstrate their suitability for large-scale roll-out.

A third, called TevvaDrive 3.0, involves the use of two “highly innovative” electric trucks with extended ranges engineered in a collaboration between Nissan and Newcastle University, and involving Tevva Motors.

Tozer said logistics service providers were fully engaging with the goal of reducing emissions in their business and pointed to low emission trials currently involving UPS and TNT.

Tozer said Innovate UK was ready to expand on its commitment and would look at any organisation interested, including those supporting the automotive sector. However, he also pointed out that one of the difficulties facing the industry was connecting the right organisations with each other, which was where Innovate UK and its partners could help.

“Look at Innovate but also look at our partners who are there to connect organisations looking for the same things,” he said. “There will be a competition [for funding] for you and your partners; you just need to find them.”

Tozer explained that since 2007, Innovate UK had committed more than £1.8 billion to innovation, matched by a similar amount in partner and business funding. The agency, which is part of the goverment's Department for Business, Energy and Industrial Strategy, has helped more than 7,600 organisations with projects estimated to be adding more than £11.5 billion to the UK economy as well as creating 55,000 jobs.

“We believe that we are in a state of change that will benefit the UK and the environment,” said Tozer.