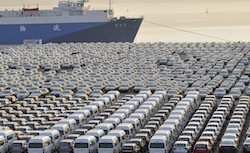 Ukraine has introduced a utilisation fee for imported cars that foreign carmakers say is a protectionist measure and will limit market access for them. The duty, which went into effect on September 1 this year. is designed by the government to stimulate domestic production and is likely to benefit Ukrainian producers such as Zaporizhia and Lviv.

The cost of utilisation will be equal to UAH 5,500 ($700) per car according to Ukraine’s government, which is the base rate for new passenger cars with an engine capacity of between 1 and 2 litres, those being the most popular capacity in the country. For buses, trucks and other types of cars the rate will be UAH 11,000 ($1,400). The rate will also be subject to engine size and the age of the car.

“Customers now will choose budget cars produced domestically rather than a foreign car because of its higher costs,” said Sergey Nosenko, head of sales for Volkswagen cars at Porsche Ukraine. “At the same time, vehicles with medium and large engine capacity will also rise in price and we hope that it will be only to a level that does not scare the customer."

In addition to finished vehicle imports, the utilisation fee will affect complete knockdown kit imports from foreign companies, which will also have to pay a special ‘ecological’ duty on components.

The head of the All-Ukrainian Association of Automobile Importers and Dealers, Oleg Nazarenko, added that with the introduction in April of a special duty on imported cars, vehicle prices have already been raised by an average of 6-10%. “[The] additional fee will add to the cost at least another $700, which will have a negative effect on importers,” he said.

“In any case, the law will not be beneficial for importers nor to citizens, and at the same time it is possible that it will also damage the Ukrainian car manufacturers,” added Nazarenko.

EU officials have already noted that the introduction of new fee is contrary to WTO rules and have said they will request repeal or revision to the law.