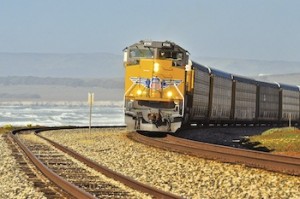 “Union Pacific Railroad has demonstrated a high level of collaboration and have not only embraced but integrated the ABF principals into their day to day operations and interaction with us,” said a spokesperson for Ford.

The framework was put in place in 2005 with the aim of increasing collaboration between the carmaker and its most strategic partners toward developing “a sustainable business model to drive mutual profitability and technology development”. The list currently includes 80 production suppliers and 25 non-production suppliers. Union Pacific falls into the latter category and joins Penske Logistics and FedEx as the logistics providers included.

“This recognition is a testament to Union Pacific’s customer focus and commitment to providing value to Ford by safely and efficiently transporting its finished vehicles and production parts,” said Linda Brandl, Union Pacific’s vice-president –Automotive. “We are excited to further collaborate and create value for Ford and its customers by increasing transparency, communication, collaboration and trust.”

In 2013, Ford sourced 65% of its global production business to ABF suppliers, up from 34% during the first year of the initiative.

Union Pacific serves almost all the major carmakers supplying the North American market, along with their tier suppliers.