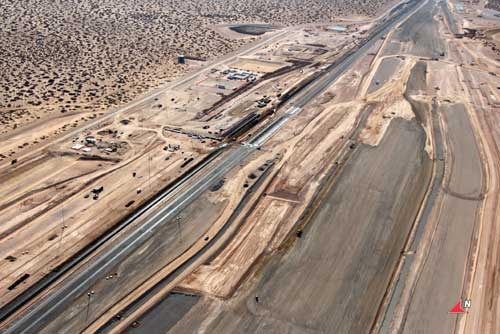 The project, which was first proposed in 2006, began construction in 2011 and was completed this year, one year ahead of schedule. It features fuelling facilities, crew change buildings, an intermodal block swap and switching yards as well as an intermodal ramp with an annual lift capacity of 225,000 containers.

According to figures from Union Pacific finished vehicles accounted for the top commodity by volume received in New Mexico in 2013, though a spokesperson for the company told Automotive Logistics the new facility does not include a finished vehicle distribution facility. However, they added that it certainly did support growth for Union Pacific customers anywhere in the area and moving along the Sunset Route, including potential automotive growth in Mexico.

“The construction of the Santa Teresa facility will permanently position southern New Mexico as a crucial component of the historic ‘Sunset Route’, one of the oldest and most critical rail corridors in American history, securing New Mexico’s future as a leader in the goods movement industry,” said the company in a statement.

New Mexico is also home to another key Union Pacific line, the former Southern  Pacific 's Golden State Route from El  Paso through Carrizozo, Vaughn, Santa Rosa, Tucumcari, and northeast to Kansas City. It is a major connection between Southern California and the Midwest for intermodal and a variety of other traffic.