Ford will have a new but familiar head of global logistics this autumn, as Grant Belanger returns to the US to replace Steve Harley, who will be leading projects to shift models from Belgium to Spain and Germany. 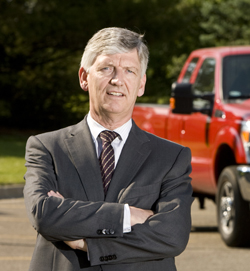 Grant Belanger will return to Dearborn this autumn to head up Ford Motor Company’s logistics as executive director for global material planning and logistics (MP&L) and parts supply and logistics (PS&L). He replaces Steve Harley (pictured left), who will return to Europe to oversee a series of model transfers to Spain and Germany as director of C-MAX and C/D product transition.

Currently the deputy general manager at Ford Otosan in Turkey, Belanger will be taking up the top role in logistics for the second time in his career, having last held the role in 2005. He will return, however, to an organisation with a more global scope and an increasingly complex supply chain to oversee.

Effective October 1st, Steve Harley, who has led Ford’s logistics since 2009 and has spent more than 40 years working in Ford’s supply chain, will lead the coordination across a number of manufacturing and supply functions in Ford’s ‘European transformation strategy’ and the launch of the C3/C4 C-MAX and C391 S-MAX Galaxy, which refers to Ford platforms and model launches.

Effectively, Harley will be among the key executives overseeing the transfer and new launches of the Mondeo, S-MAX and Galaxy models that are currently manufactured at Ford’s Genk, Belgium plant, which will be closed, to its plant in Valencia, Spain. He will also help shift production of the C-MAX from Valencia to Saarlouis, Germany, where it will be built alongside Ford’s other global compact ‘C’ car, the Focus.

The role will include much more than logistics, including managing the changes in the supply base footprint, maximising plant capacity, determining the factory layout and material flow as well as shift patterns. “It’s all the things associated with really sweating the assets and preparing so that as and when the recovery occurs in Europe, Ford will have both the capacity and the cost base to take advantage of it,” Harley told Automotive Logistics.

Ford announced last year that it would close its Genk plant, along with a van and a stamping factory in the UK, as it struggles to address excess capacity in a European market that has been shrinking for six consecutive years. Harley likened the transition to a smaller version of what Ford did in the US after the financial crisis in 2008-2009, when the carmaker shuttered many plants. “It’s important that we make the adjustment and prepare the factories and the supply base to be ready,” he said.

Harley has held Ford’s leadership role for logistics since September 2009. He told Automotive Logistics that the new job would be a big departure from logistics, where Harley has spent most of his career. The project is similar, however, to a previous assignment Harley had about ten years ago when he helped shift the Transit Connect van out of Genk to Ford’s Turkish plant in Kocaeli, near Istanbul. “The new project is sort of the same but on steroids,” he said, referring to the high volume of production that the transfer will involve.

Harley began at Ford in 1972 as a truck driver before going on to acquire degrees in transport and logistics and hold a number of operational and management roles in supply chain functions. Prior to his most recent role, he was director of MP&L for Ford Europe. 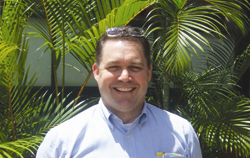 Grant Belanger was most recently deputy general manager at Ford Otosan
The executive career of Grant Belanger (pictured right) has spanned three continents in purchasing, logistics and manufacturing. As deputy general manager of Ford’s joint venture in Turkey, he was has been part of the top management for an operation that includes around 7,900 employees at engine and assembly plants in Kocaeli, which builds the Transit and Transit Connect van for global export. In the first half of this year, Ford had a 12.8% market share in Turkey, with sales up about 2% to 50,500 units.

This will be Belanger’s second tour of duty at the helm of Ford’s MP&L department, having held the role for more than six years up to 2005. He has since then also had senior assignments in Ford’s global manufacturing business office, and in operations and quality for Ford South America, where he was responsible for manufacturing, purchasing and logistics.

Belanger confirmed that he would return to the US September 9th to start handover activities with Harley.

Belanger will not be returning to the same logistics operations that he he left in 2005 or overseen in South America in 2008. Indeed, when Harley took over the role in 2009 it was during a period of tremendous change for Ford and its supply chain, which has continued over the past four years. From a management perspective, the global function of the MP&L role had been formalised shortly before Harley began as part of the company’s ‘One Ford’ strategy. Although the role had some global scope before, Ford officially aligned the Dearborn office to give strategic oversight to MP&L directors in North America, Europe, South America and Asia Pacific Africa.

According to Harley, that global alignment has helped drive innovation and faster change across of the regional business units, particularly in markets like China and India. “These organisations are on a very different point on the learning curve than we might have expected, thanks to constant communication within the global structure,” he said. “A new idea is not rejected just because it’s new – in China, there is no such thing as ‘we can’t do that because it’s not been invented here’. They just do it.”

Responsibility for North American spare parts logistics was also incorporated into the role just prior to Harley starting, as Ford looked for opportunities to share transport and warehouses between inbound and spare parts logistics. Interestingly, as far back as 2004, Belanger had been instrumental in projects that explored sharing logistics between inbound and spare parts, together with who would later be his successor at MP&L, Frederiek Toney (who is now president of Ford’s customer service division). 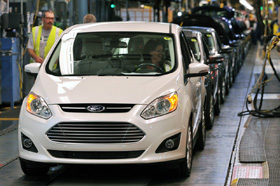 Perhaps even more crucial to Ford’s return to profitability, Harley has overseen the supply chain during a period of disruptive change. When he began the job, Ford was in the midst of reducing its manufacturing footprint in North America, going from 23 assembly plants in the US, Canada and Mexico, to what is today 13. At the same time Ford changed its manufacturing approach to be more flexible, with plants able to build different models on the same line, including those with different powertrain. All of these changes had significant implications for logistics and the supply chain, from managing inbound inventory to reengineering rail and truck routes for outbound to match the network’s size.

Meanwhile, on the international stage Ford’s changes were arguably even more significant. The company is now building across more global platforms, which has meant Ford shares many more parts across its supply base in different regions. As part of ‘One Ford’, the carmaker also concentrated manufacturing and supply chain expertise in different regions: North America is a centre for trucks, for example, while Europe is for small cars. There is also product development led for the Asia Pacific Africa and South America regions. The result has been a significant cross flow of material, whether between North and South America, China, Thailand and Europe.

Harley has often spoken about the important role that logistics plays in keeping the network running smoothly and reliably even as the supply chain becomes more complex. At the Automotive Logistics Global conference last year in Detroit, he spoke about how logistics had changed in the face of longer supply chains at Ford.

“The distance has changed the entire process. It used to be that you could broadcast supply to your suppliers just two or three weeks in advance [of production]”, said Harley. “If you do that today, the material is already on the water, and it’s too late. You need to be far more disciplined.”

At the same time, Harley has emphasised the importance of measuring total landed cost, and of considering logistics in sourcing and production decisions. “If you can take a day or two out of the vehicle delivery chain, for example, that is like running two days in the factory,” he also said at the Global conference. “Even if it costs a little bit more, it could be a very worthwhile, especially in a period of high demand.”

Harley has been part of global projects to address these changes, including the implementation of a global order-to-delivery ordering and IT system, which he outlined to Finished Vehicle Logistics in a major interview in 2010.

"Ford has taken a global leadership position and a lot of that is to the credit of the logistics team that works with me" - Steve Harley, Ford Motor Company

Of course, not everything has been perfect. Ford has had to manage through a series of natural disasters over the past four years both globally and in North America, although it has done so with relatively minimal disruption. After manufacturing difficulties with new model launches, including a long delay for the Lincoln MKZ, the company has taken a more careful approach to new launches.

But on the whole, Harley said that the importance of both MP&L and PS&L has been “dramatically improved” and recognised by both Ford’s senior management and by external observers. Ford was the first OEM to crack Gartner’s top 25 supply chain ranking in a number of years, placing 22nd this year from 26th in 2012 and 51st in 2011.

“Ford has taken a global leadership position and a lot of that is to the credit of the team that works with me,” said Harley.

More change to come in the supply chain 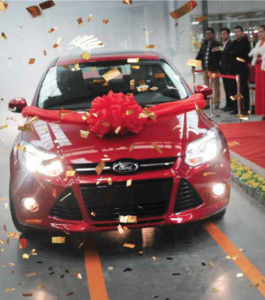 Grant Belanger will come back not only to a more complex supply chain – which includes 130,000 parts, 500 production commodities and 600 non-production commodities, according to Ford – but also with supply and production changes continuing across Ford’s global network. The recovery in North America has led to a huge rise in production. In the past 15 months, the company has increased capacity by about 600,000 units without expanding its production footprint. That will have required significant logistics engineering to maintain parts and vehicle supply; this looks set to continue as the US market recovers.

A push into Asia Pacific has also resulted in the company’s largest manufacturing expansion in a century, as Ford plans to double production capacity in China to more than 1m vehicles with the opening of a third plant next year in Chongqing, and another during 2015 in Hangzhou, south of Shanghai. Ford is also adding a new plant next year in Sanand, Gujarat in western India.

The company will meanwhile close its assembly and engine plants in Australia by 2016, leading to a shift in material and vehicle flow in the region.

Along with the plant closures in Europe, Ford is expanding output at Russian plants in Tatarstan and St Petersburg with joint-venture partner Sollers. The carmaker plans to switch soon from kit deliveries in those plants to full-cycle production.