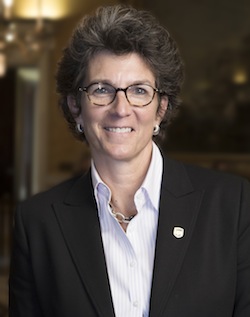 Cindy Miller (left) has been promoted to president of global freight forwarding at logistics and supply chain giant, UPS. She replaces Steve Flowers, who has moved to the company’s strategy group.

Miller has been with the company for 28 years and started as a driver in Allentown, Pennsylvania. She was most recently president of UPS Europe and in that role achieved record growth and service levels across the European region, according to the company.

Miller directed key expansions in the healthcare and retail/B2C sectors, including the rollout of UPS My Choice and the UPS Access Point network. In addition, she oversaw multiple acquisitions and the opening of new or expanded facilities across Europe, including France, Austria, Poland and Germany.

Miller will have responsibility for automotive activity among her wide range of duties. Automotive accounts for approximately 9% of UPS’ freight forwarding activity, and the sector represents a higher percentage of its business than the industry average, according to the company.

“We attribute that to our people, systems, and the broad ranges of services we offer – from urgent guaranteed air freight shipments, to our UPS Preferred Multimodal services, to our warehousing capabilities,” a spokesperson for UPS said.

Miller’s announcement follows the appointment of Juan Perez as chief information officer at the beginning of this month. Perez is replacing Dave Barnes, who is retiring after 38 years with the company, but will stay on until June 30th to ensure a smooth transition of responsibilities.