US carmakers roll out CNG technology for inbound and outbound deliveries

A number of carmakers in the US are working with their logistics providers and equipment makers in an effort to reduce carbon emissions in the inbound delivery of parts and the outbound delivery of vehicles. Fiat Chrysler Automobiles (FCA), Toyota and Honda have all recently unveiled trials on more environmentally friendly applications as the industry makes an effort to curb emissions, including compressed natural gas charging stations and trucks that run on the cleaner fuel. 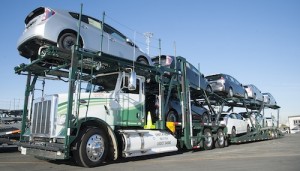 In November Toyota’s own car carrying business, Toyota Transport, introduced a car carrier that runs on compressed natural gas (CNG). The company said it emitted 85% less particulate matter and 10% less CO2. The vehicle was commissioned by Toyota and designed and built in a joint collaboration with truck maker Peterbilt and trailer provider, Cottrell.

Peterbilt and Cottrell have developed a tractor/trailer combination that accommodates the alternate fuel tanks, without compromising the extra vehicle hauling space of the head rack. The achievement marks the first full car hauler trailer with a head rack that Cottrell has built into a CNG truck.

Toyota Transport has plans to use truck from its Southern California vehicle delivery operations in Long Beach. It will evaluate the performance as well as compare the efficiency versus the current diesel trucks over a trial period. The Southern California operation covers Long Beach and Mira Loma, delivering approximately 200,000 vehicles annually with an existing fleet of 32 trucks.

“We started exploring the CNG option more than three years ago, and it has been worth the wait,” said Kirk Welch, senior analyst, Toyota Transport Compliance. “Natural gas is the cleanest burning fossil fuel and will help Toyota advance our environmental efforts to reduce fleet emissions.”

That trial followed the announcement that Honda had opened two CNG filling stations in Ohio for its own delivery trucks running on the gas. The carmaker opened the first station in Marysville in September this year and a second one in Troy in October. The stations were designed, constructed and will be operated by Trillium CNG, a provider of CNG fuelling services.

The Marysville station is the first CNG station located on a Honda property in North America. The carmaker said it was built to provide fuel for companies that have already adopted the use of CNG, and to encourage and facilitate suppliers and logistical partners to adopt and expand its use in the trucks used in support of Honda operations.

According to Honda CO2 emissions from moving vehicles from its plants to US Honda and Acura dealers have fallen 4.8% from levels a year ago. The company also said that CO2 emissions from transporting service parts to dealerships in the US has been reduced 36.6% over the past six years.

In a similar move, Fiat Chrysler Automobiles (FCA) is opening an alternative fuelling station in Detroit this week, which it says will be the largest of its kind in North America. The carmaker is also converting its diesel-powered truck fleet in Detroit to run on the alternative fuel. The carmaker is holding a special event on December 4th at its Lynch Road facility in Detroit when further details will be announced.