Comprehensive transport legislation signed last week in the US includes an amendment to rules governing the trucking sector that will allow greater flexibility in the use of vehicle transporters. The legislation now includes a specific authorisation for automobile transporters to haul general freight on backhaul trips, including cargo on the back of a truck-tractor power unit. 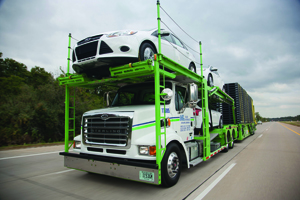 Following its passage through the House and Senate, president Obama signed the Surface Transportation Reauthorisation and Reform Act of 2015 on December 4th. The bill, which is also known as the FAST (Fixing America’s Surface Transportation) Act, includes plans for a $305 billion investment in the US infrastructure along with many other complex regulatory and spending decisions affecting US highways.

One of those regulations applies to the definition of automobile transporters (Section 5513).  The legislation now reads: “An automobile transporter shall not be prohibited from the transport of cargo or any other commodity, including a cargo or general freight on a backhaul, so long as it complies with weight limitations for a truck tractor and semi-trailer combination.”

The new legislation amends the definition of backhaul to include “the return trip of a vehicle transporting cargo or general freight, especially when carrying goods back over all or part of the same route”.

Under previous legislation stinger-steered vehicles were prevented from combining different types of freight in certain respects. More specifically, non-vehicular freight was not allowed to be loaded on the tractor portion of the truck.

Stinger-steered vehicles are those with the coupling device on the power unit located behind the last drive axle. The legislation does not allow for an overhang on highmount carriers with an overall length of 75ft (though highmounts that are 65ft in overall length can run with a 3ft front overhang and 4ft at the back). Highmount car carriers are fixed truck trailer units.

Greater flexibility
The latest legislation has particular significance for the use of convertible trailer equipment, which can accommodate both cars and general cargo, because it now allows for more flexibility in the type of cargo that can be carried.

According to Robert Farrell, executive director of the Automobile Carriers Conference (ACC), part of the American Trucking Association, the legislation has, more specifically, authorised the use of interoperability of the convertible trailer.

“The FAST Act will allow the tractor section of a stinger steered auto transporter to carry non-vehicular freight,” Farrell explained. “That is an important component of the convertible trailer concept. This will allow more flexibility in the industry and in certain cases help reduce the wasteful and excessive empty miles that the auto transport industry currently experiences.”

Long-fought battle for change
The change to the legislation has been hard won by some leading figures associated with the US finished vehicle sector. They include the ACC’s Robert Farrell, former congressman Ken Hulshof, Jack Cooper Transport’s CEO Mike Riggs and a number of other supporters, including Convertible Trailer Manufacturing’s CEO, Bill Pawluk. Pawluk initiated the move to change the legislation back in 2011 when the US Federal Highway Administration (FHWA), determined that hauling freight on the stinger tractor was not allowed.

Speaking to Automotive Logistics this week Pawluk said: “I’m encouraged that the US legislative process has at last adopted the concept of convertible trailers. We now have the ability to reduce the excessive and exorbitant waste in the automotive logistics industry in the US. We will capture this waste and convert it to much needed productivity without compromising safety, while improving efficiency, increasing profitability and demonstrating a whole new formerly ignored level of environmental responsibility.”

Weighting in vain
As the FAST Act has been progressing through both houses of the US political process the ACC had campaigned for an additional five feet (1.5 metres) in stinger truck trailer length, including an increase in the front overhang from 3ft to 4ft, and an increase in the back overhang from 4ft to 6ft. For a standard, five-axle truck this would result in the requirement of a higher weight allowance perhaps to a maximum gross weight 88,000lbs, an overall truck trailer length of 80ft and an overall load length of 90ft.

With the average load factor having decreased by almost two full units over the last few years, the ACC figured that the weight exemption would eliminate the need each year for more than 104,000 trips, 87.3m vehicle miles and 17.8m gallons of fuel, with savings that could be passed on to the OEM. The ACC also estimates that CO2 emissions could be cut by more than 181,000 tons a year.

The Senate granted the increased length in overhang for the car carrier sector and an overall load length of 90ft, but not the weight, even though the ACC dropped that weight request in half, to 4,000 pounds. Any length advantage is now potentially compromised by the inability to carry any extra weight (though a 10% leniency in the loaded weight can be granted on a spot basis per state).

“While we are grateful that our provisions for added length and a national overhang standard were included, we are very disappointed that our request for a weight variance was not included,” said Farrell. “These productivity benefits will have a very limited impact on the industry without the additional weight allowance.”

However, for those using convertible trailers, it now looks like there will be opportunities to make savings on journeys by exploiting the backhaul for its total value rather than running empty.

Read more about the impact of the FAST Act in the forthcoming edition of Finished Vehicle Logistics magazine (Jan-March 2016).