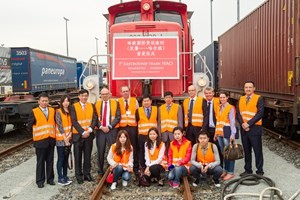 The service builds on the agreement that UTi signed with Beijing Changjiu Logistics, one of China’s leading automotive logistics providers, at the end of last year. The deal gives each the ability to cross-sell core services to automotive companies both within and beyond China.

Dubbed the Iron Silk Road service, the company said the new weekly service would provide customers with more cost effective transport options, including lower rates than air freight. UTi also said that the service, which takes 15 days in either direction, meant shorter transit times than ocean, which is typically between 50-55 days.

The service carried 41 containers eastbound on its first run and 46 containers on the return westbound journey. UTi confirmed that the freight included automotive equipment, among other cargo.

Ditlev Blicher, UTi’s president of the Freight Forwarding division, said that the company is also offering VMI/production logistics for automotive OEMs and tier one suppliers, as well as aftermarket parts and accessories distribution in China. Other destinations in the north of the country, including ports, are accessible within a few days without additional on-carriage charges, according to the company.

"This is only the first link in our Iron Silk Road rail service and only one of the many ways we are serving the logistics requirements of automotive, aerospace and other manufacturers," said Blicher. He added that the establishment of HAO Logistics would help to attract more investment into Heilongjiang province while elevating UTi's penetration in the northeastern region of China.

As revealed in an interview earlier this year with UTi’s CEO, Ed Feitzinger, the company is one of General Motors’ biggest freight forwarders, delivering a large amount of critical material out of Asia Pacific and China.

Ed Feitzinger acknowledged then that while UTi had a strength in forwarding its business with contract logistics in China was focused on select clusters along the coast. He said working with Changjiu was a way of gaining scale without having to swallow a much larger company.

“Nothing about our contract logistics business in China today says that we are going to be a $1 billion company in ten years,” he said. “With Changjiu, that is more possible.”

Read the interview in full here.

Latest in a long line
The Iron Silk Road service is the latest in a number of China-Europe rail services over the past year.

In July, DHL Global Forwarding signed a memorandum of understanding with Kazakhstan’s national rail operator, Temir Zholy Express, for the provision of block train services on the land bridge connecting Europe and China.

That followed a twice-weekly rail service the company established in June between Zhengzhou in central-eastern China and Hamburg in Germany.

The company now has three services between China and Europe.

Trans Eurasia Logistics (TEL), a joint venture between DB Schenker Rail and Russian Railways (RZD), has also started rail shipments of vehicles from the inland port of Duisburg in Germany, to Chongqing in China.

DB Schenker has also been making regular rail shipments of CKD kits for BMW from its Leipzig logistics centre in Germany to BMW’s joint venture assembly plant in Shenyang, China since 2011.