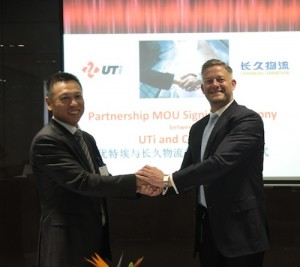 Under the agreement each partner will have the ability to cross-sell core services to automotive companies both within and beyond China over the next year and, subject to review, look to also create a logistics service provider in the Asia Pacific region that will broaden the scope of services on offer, including quality management and small assembly, and seek out new customers

UTi and Changjiu will focus on three core areas in the China market: Europe to China rail, VMI/production logistics and aftermarket parts and accessory distribution.

“This strategic partnership is an agreement which commits our two companies to a 12-month period of joint sales and product development for new services utilizing our combined resources," UTi's president for Asia Pacific, Ditlev Blicher (pictured right), told Automotive Logistics. "After the 12 months, if both parties agree, we will form a separate JV business entity that will operate under a logistics scope in China and will focus on full end-to-end automotive logistics services for both inbound and outbound China business."

UTi said the partnership would help the company grow its footprint in China by benefiting from Changjiu's established “client base, cultural awareness and governmental relationships”. At the same time it will give Changjiu’s customers faster entry into global networks through UTi’s international network of supply chain and transport services. The company is present in 59 countries around the world.

Benefits of independence
Blicher said that UTi had chosen Changjiu because it was the largest independent automotive LSP in China and, being privately held, had no existing allegiances or ownership conflicts with OEMs, allowing both companies to approach a wider client base.

"Changjiu’s independence is unique in the China market for a company of their scale and it’s one of the reasons that they are such an attractive partner for us because they can play virtually anywhere, can pitch virtually any client and are agile and flexible enough to innovate and to partner with companies like UTi," added Blicher.
In a reciprocal statement, Changjiu's board chairman, Bo Shiju (pictured left), said that combining with UTi's automotive offering would release value for global automotive companies importing into China, as well as allowing it "to tap into the next big wave as Chinese OEMs and suppliers began to export vehicles and service parts abroad".

Changjiu’s core business is finished vehicle, dealership and aftermarket services in China. The longer-term five-year goal it has with UTi is to build on existing customer relationships while establishing new services for new clients.

Regarding its three core areas of development outlined, developments are already underway on the China to Europe rail service. Changjiu has already had success operating such a service for global OEMs and UTi is now running Europe to China shipments using Changjiu’s network.

"We are looking at freight going in the other direction as well from east to west and will be targeting cargo originating in Korea and Japan that would otherwise move via ocean by utilising the Harbin-Manzhouli corridor," said Tiffany. "With Harbin-Manzhouli, there is a significant transit time benefit going from ocean to rail and the Chinese government is investing in the infrastructure and promoting these inland corridors aggressively. Government incentives will catalyze even greater trade volume and Changjiu’s contract logistics network in north China gives us 'boots on the ground' where we had none before."

In another example of where the joint venture is already moving, Cypress Li, head of Automotive, Greater China, said UTi is now handling inbound freight forwarding for a US-based automotive OEM and using its operating background with the client to help Changjiu develop a robust solution for their finished vehicle delivery in China.

Looking ahead Li said that Changjiu’s customers were likely to benefit as economic development continued to grow:
“We just have to look at China and its increasing role as an economic superpower. There are some well-known Chinese brands in the consumer and electronics sector like Huawei and Xiaomi that have gone international, but there is tsunami wave of mid-range Chinese manufacturers that few people outside China have heard of that will follow very quickly. UTi’s freight forwarding and contract logistics network gives Changjiu’s client base immediate access and coverage to 310 cities around the world and we are expecting to kick this into high gear.”