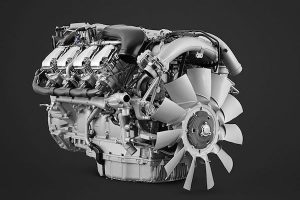 Swedish truckmaker Scania is trying to reduce the order backlog for trucks, and industrial and marine V8 engines, because of a strike at an unnamed supplier of cast engine components, which began on June 14 and is reportedly continuing. However, last week the supplier started to produce engine blocks for Scania making it possible for the Swedish truck and engine manufacturer to start planning a new delivery schedule, spokesperson Örjan Åslund told Automotive Logistics.

“[Supply is] still unsecure and with huge delays, but [it is] better than a total stop,” he said. “We simply had to start making up a backlog with orders, in close dialogue with the concerned customers.”

In a statement, head of Scania Trucks Alexander Vlaskamp said: “This is probably the worst disruption that has hit our company in many decades when it comes to supply disturbances. I really would like to thank our customers for the great patience and understanding they have been showing during this dire situation.”

That has included some being offered longer truck leases, others specifying a different powertrain, while a third group was prepared to wait for a V8-powered truck to be delivered, Åslund said. Customers understood Scania was the “victim” in a larger process, he added.

Meanwhile, Vlaskamp commented: “We at Scania are now doing everything in our power to reinstate a normal situation and deliver V8 trucks and engines worldwide as soon as possible.”

The company, which builds the engines at Södertälje near Stockholm, has warned it will take some time to clear the backlog because “production disturbances of this magnitude create all kinds of logistical challenges.”

Uncertainties lie ahead until it is possible to ramp up production, said Vlaskamp, but added that the truckmaker was starting now, and would increase gradually with the aim of confirming a correct delivery schedule during the next few months for existing orders. Then he said the c ompany would open up for new orders.

“This whole situation came at a time when we were extremely busy producing new V8 units and I can only say how sorry we are that this had to happen to Scania’s loyal customers,” Åslund told Automotive Logistics, adding that the company expected to return to normal production and delivery schedules at the beginning of the first quarter next year.

Pointing out customers were already dealing with the long lead times that massive demand for V8s was causing, he said: “Some will always be disappointed, that is unavoidable. But in the long run we hope to see that there are no lasting effects of this hiccup in our supply chain.”

Asked if the truck and engine maker would be looking elsewhere for a supplier following the problem, Åslund said it was inevitable that “having experienced something like this [would] result in second thoughts and a widened scope.”