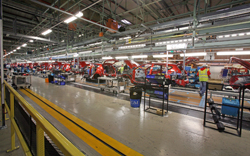 The head of Germany’s automotive association, the VDA, has warned that the UK’s car production sector could be severely cut in the event of a ‘hard’ Brexit.

Speaking to the Financial Times this week, Matthias Wissmann, who is also a former German transport minister, suggested carmakers operating in the UK may flee to central and eastern Europe in the event of a hard Brexit and warned that the UK’s automotive industry could end up like Italy’s, where annual car production is a quarter of what it was two decades ago.

“If the UK doesn’t want to suffer the same fate as Italy’s car industry, it must be concerned to retain full access to the single market,” said Wissmann.

While the UK is undeniably an important market – Germany exported more than 800,000 vehicles to the UK last year, according to the FT ­– keeping the EU-27 together was the priority, he said, in apparent support of recent remarks by German Chancellor Angela Merkel that no exceptions should be made to the EU’s single market rules, including freedom of labour movement.

Wissmann’s comments were later backed up by similar statements from the Association of German Chambers of Commerce and Industry (DIHK) and the German Confederation of Skilled Crafts (ZDH).

Change of tune?Meanwhile, on Friday, Nissan chief executive Carlos Ghosn declared he was “confident the government will continue to ensure the UK remains a competitive place to do business”, following a meeting with UK prime minister, Theresa May.

The comments seem a long way from his statement in August that all investment in its UK was on hold, following the referendum vote in June to leave the European Union, and from the suggestion that Nissan would seek compensation from the UK government, if tariffs were put on British exports after the exit from the EU.

The FT suggested Ghosn had been given an assurance by May that trading conditions at Nissan’s Sunderland plant would not change post-Brexit. A spokesperson for Nissan declined to comment further, however.

One in three UK-built cars is a Nissan and the OEM exports 81% of its UK output, with the majority going to mainland Europe.

Sector-by-sector approachWhile there is still no clarity on what position the UK will take into negotiations for exiting the EU, mainstream media in the UK are now suggesting the pursuit of “sector-by-sector” deals may be on the cards.

Outside of the automotive sector, there has also been talk of the UK continuing to make payments into the EU budget in order to maintain passporting rights for the country’s financial institutions.

Key members of the European Union have said any free trade with the market is conditional on freedom of movement, while the UK continues to insist that it wants to take control of immigration.

Morgan Stanley economists recently increased the chance of a hard Brexit to 70%, up from 55% previously. Other analysts have made similar adjustments.

In its autumn forecast released this week, the EY ITEM Club said the EU had little to lose and could potentially gain, should the UK leave the single market, given the huge deficit in goods with the EU, including in automotive and aerospace.

“The Brexiteers argue that this puts the UK in a strong negotiating position, since we could threaten to impose duties on these imports. However, in our view it is a weakness, since it is unrealistic to suppose that UK manufacturers and farmers could replace these imports effectively or that UK consumers would want to switch their spending to other products,” it said.

“The only card the UK holds here is that it could potentially buy these products more cheaply in world markets. It is important that we play this card to best advantage,” it added.