BMW has confirmed that the VDL Nedcar plant in the Netherlands, which is already building the Mini 3-door model, has this month added production of the new Mini Convertible (Mini Hatch). It will be the only plant making that particular model. 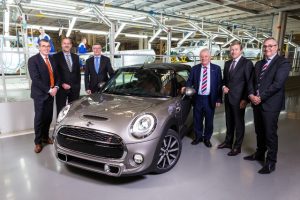 Dutch manufacturer VDL Groep bought the Nedcar plant, in Born, from Mitsubishi at the end of 2012 following the Japanese carmaker’s decision to end production of Colt and Outlander vehicles there. The production of Minis under contract to BMW began last year.

“VDL Nedcar has already proven for the Mini 3-door to be able to produce Minis on a high level of quality and the same will apply to the Mini Convertible. Thus VDL Nedcar is contributing significantly to the success of Mini. Already in 2014 the plant has produced nearly 30,000 cars for the BMW Group,” said Oliver Zipse, member of the board of management responsible for production.

Mini is the only carmaker that has series production vehicles built through contract production in the Netherlands.

A spokesperson for BMW said that production of the Mini Convertible in Born would not necessitate any major change in the logistics chain as production of the Mini 3-door model had already proven to work in coordination with the plants in the UK. The same tier companies that feed production at the Oxford plant in the UK will supply production in Born, and the same inbound transport providers serve both plants.

“The Dutch plant of VDL Nedcar, Born, has logistic advantages due to the short distance to the UK production triangle,” added the spokesperson.

That triangle is made up of the Oxford plant, the subassembly plant in Swindon and the engine plant at Hams Hall. The Oxford plant makes the Mini 3 and 5 door models and, since July 2015 the new Mini Clubman. The Nedcar plant makes additional volumes of the 3-door model but will make the Convertible exclusively. The factory has capacity for the production of around 200,000 cars per year, when operating in two shifts.

Up to 60% of the parts used on the Mini Convertible will be supplied from Swindon and VDL Nedcar will build the vehicle from the ground up.

VDL Groep consists of 84 operating companies focused on the development, production and sale of semi-finished and finished vehicles, as well as the assembly of cars.