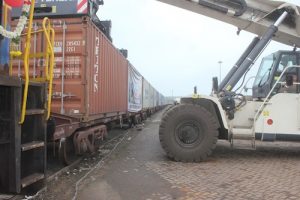 Carmakers in India with business in Bangalore (Bengaluru) are now benefiting from a new direct rail service between the city’s inland container depot and Krishnapatnam port on India’s east coast.

The weekly service, which began in the middle of June this year, is being run in association with Concor, the Indian government subsidiary that handles cargo movements, terminal operations and warehouse services. It can carry 90 TEUs in each direction and, according to a spokesperson for Krishnapatnam port, cuts the transport time down to 18 hours, rather than 24-36 hours it takes to transport the containers by road. The service also purports to save customers between $100-$150 per container.

“KPCT is currently handling 300 FEUs in a month for Isuzu, Volvo, Scania, TVS, Toyota and other major automobile industries in Bengaluru,” added the spokesperson.
He also said that two- and three-wheeler finished vehicles were being moved in containers between Bangalore and the port.

The spokesperson said the service aimed to improve the intermodal services on offer in developing regions and boost domestic and export-import trade in the country.