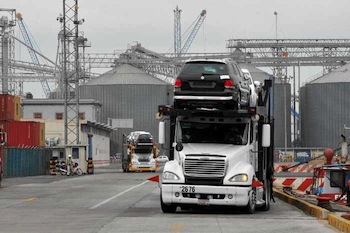 According to figures from the Mexican government the number of finished vehicles being moved by Mexican ports has fallen for eight consecutive months, with a drop of 1.9% noted for August. Between January and August this year, Mexican ports handled 790,843 units compared to 806,542 units in the first eight months of 2012. However, according to Wallenius Wilhelmsen Logistics, the bigger picture in Mexico will see a continued dependency on Mexico as a location for both short and deep sea trades as production capacity climbs toward 5m by 2018.

This year ports in the Gulf of Mexico have been particular badly hit, reporting a drop of 4.9% to 571,107 vehicles, though the port of Altamira bucked the trend, seeing traffic rise by 29.4% to 31,863 units. Despite a drop of 6.4% in the number of cars handled, Veracruz remains Mexico's most important finished vehicles port, handling 539,244 units in the first eight months.

Despite this logistics providers and ocean forwarders have been increasing services, at least on short sea routes between Mexico and the US. Höegh Autoliners is providing more services and anticipates that the increase in demand for services will continue. The company is calling three times a month at Veracruz to discharge and load vehicles and has the option to add two more calls according to demand. Höegh carries Nissan volumes from Veracruz to the US East Coast, as well as providing services for GM and Chrysler.

In September this year WWL also increased its services from the port of Veracruz to the US East Coast and is offering two to three sailings per month, which will include connections to its global network.

According to Wallenius Wilhelmsen Logistics the market activity discernible in 2012 and in the early part of 2013 reflected OEM struggles with rail capacity ex Mexico.

“Coming out of the financial crisis, capital expenditure on new equipment lagged behind the ability to support the growth coming from many areas in North America, and Mexico seemed to be suffering the most,” said Rich Heintzelman, executive vice president and head of Commercial at Wallenius Wilhelmsen Logistics Americas. “This seemed to be happening during a period which coincided with new plants coming online, coupled with announcements about future expansion plans by other OEMs.

Heintzelman said this caused concern for many of WWL’s customers, who stressed the importance of having an ocean service to support their needs.

The rail capacity shortage now appears to have eased but according to Heintzelman Mexico will continue to be a sourcing location for both short sea and deep sea trades in line with OEM capital expenditure for plant capacity.

“We all need to keep in mind that OEM planned production capacity will go from 3m units in 2013 up to 4.88m units by 2018, reflecting a significant increase available for export,” he told Automotive Logistics. “Many of the OEMs are still trying to determine what other trades they will source from Mexico and, as they do, WWL feels that the commitment we have made to direct calls in Mexico will support our direction.”

WWL said it is looking toward further expansion in South America, but this will be in line with cargo volumes that can support the additional tonnage required for a solid ocean product. Heintzelman went on to say that it was important to have a good balance between both southbound and northbound traffic.

“With the increase in OEM plants in Mexico and Brazil we are optimistic regarding the growth within these regions going forward,” he said.