Vigo ramps up the ro-ro 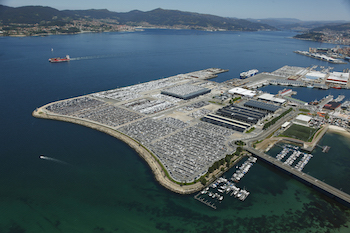 The north-western Spanish port of Vigo will start using a sixth ro-ro ramp in August this year and intends to build a seventh, making it the country's leading port in terms of its ro-ro provision. According to the port authority, the idea it to optimise its existing car carrier service and also to capture new traffic flows.

All of the ramps are situated in Bouzas Quay.

The five already operating have an alongside draft of between 8-11 metres and are between 152 metres and 301 metres in length.

The sixth ramp, which is scheduled to begin operations by the end of August, will accommodate much larger vessels: those requiring a draft of up to 15 metres. The dockside, at 65 metres, is also wider, while the ramp, at 368 metres in length, will be the longest yet. It cost a total of €5.4m ($6m), of which €2m was spent on the actual ramp and the rest on mooring points for the vessels alongside.

The new ramp is also mobile, allowing it to be lowered or heightened in line with tides and also high seas. Vigo is known to experience differences in wave heights of up to 4.5 metres.

The sixth ramp was built to meet the increased demand since Vigo’s Sea Motorway service began and also because PSA Group announced that its local manufacturing plant would assemble the new K-9 van model in the first quarter of 2018.

Enrique López Veiga, the president of the port authority, said that Vigo occupied a strategic position to serve the expanded Panama Canal and could therefore become a key location for long distance consignments of finished vehicles. Given that this also implies larger vessels, the port is planning a seventh ramp, 300 metres in length and situated parallel to the existing ones. It will have an alongside draft of 300 metres and also provide a surface area of 12,000 sq.m.

Statistics relating to ro-ro traffic at Bouzas for the first five months of this year show that the port handled 441,141 tonnes of mainly finished vehicles and automotive parts, which represents growth of more than 11% over the previous year. The neighbouring PSA plant increased production by 7.8% in the first six months of this year.