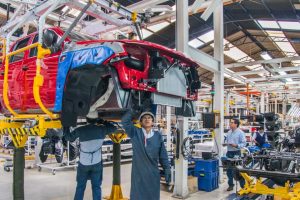 Volkswagen Commercial Vehicles says FISUM, its local contract partner in Ecuador, has started production of the new Amarok pick-up truck model at a facility in Quito.

It is the first-ever production of VW vehicles in the South American country.

The complete knock down (CKD) parts for production are being sourced from Argentina and Germany. Initially the production rate has been set at about 2,000 vehicles per year, with the ability to increase this to 10,000 if demand increases.

“The production operation in Ecuador was a further, important building block in the internationalisation strategy of the Volkswagen Commercial Vehicles brand, said Josef Baumert, member of the VW board of management responsible for production and logistics.

“The manufacturing operation will observe the same high Volkswagen standards as in all our factories around the globe," he added.

In 2016, the Volkswagen sold about 480,000 light commercial vehicles globally, produces at its sights in Hannover in Germany, Poznań and Września in Poland, and Pacheco in Argentina.