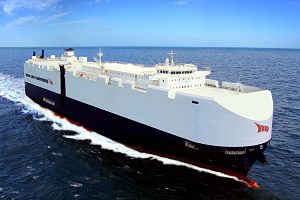 They will replace two of the nine heavy fuel freighters currently in use.

The use of liquified natural gas drive systems significantly reduces emissions, with CO2 expected to drop by up to a quarter and nitrogen oxide (NOx) by as much as 30%.

VW, which transports half of the vehicles it produces by sea, is also considering a change for other conventionally powered freighters to LNG drive systems.

Thomas Zernechel, head of group logistics at VW, said the charter of the LNG vessels was the first milestone in optimising the company’s marine transport systems.

“The possibility of changing other vehicle transport vessels chartered by Volkswagen over to LNG operation will depend on the availability of the necessary infrastructure,” said Zernechel. “Apart from LNG as an alternative fuel, we are also working on other projects which will continuously make our logistics processes more environmentally compatible.”

The carmaker’s environmental efforts in this space are part of its “Green Logistics” initiative.

According to the International Maritime Organization (IMO) international shipping accounts for approximately 2.2% and 2.1% of global CO2 and greenhouse gas emissions respectively.

In January 2015, the IMO introduced new regulations aimed at reducing the impact of ship emission.

Volkswagen joined the Clean Shipping Network at the beginning of 2014 and was the first German automaker to use the index, which assesses the environmental impact of marine transport.

The company intends to transfer vehicle and material transport in Europe increasingly from trucks to lower-emission means of transport such as ships in the future.

Since the end of 2015, material from Turkey for the Autoeuropa plant in Portugal has been shipped from Izmir to Lisbon by sea. The transfer from road haulage to marine transport on this route cuts annual CO2 emissions by 240 tonnes as well as reducing costs.