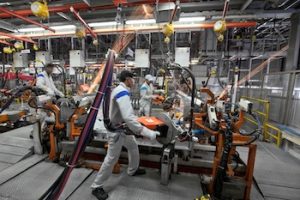 [Updated April 1st] Rising demand from export markets and anticipated domestic appetite for the forthcoming Ameo model are behind Volkswagen India’s plans to add a third shift to its plant in Chakan, near Pune (pictured). The move will produce 800 new jobs there.

“In 2016, we are expecting growth in our domestic as well as export volumes,” said Andreas Lauermann, president and managing director of VW India. “With the new Ameo, a car that has been specially developed for India, we are expecting a higher demand from the domestic Indian market while we look at supplying more cars to our export markets, too. In all, we expect to increase our production by around 15% this year as compared to the last one.”

Last year, the plant made almost 123,460 vehicles on a two-shift pattern (of a total annual capacity of 130,000). With the additional third shift, which has been running for the last few weeks, annual capacity has been increased to 200,000.

The Chakan facility currently makes the VW Polo, Vento and Skoda Rapid and, later this year, will start making the VW Ameo compact sedan in the next two months for the domestic market, with output subject to demand.

Dr Lauermann told Automotive Logistics that new parts for the Ameo would be included in VW’s standard inbound process and would generate synergies with existing and new suppliers. Existing outbound road transport providers will take care of the distribution to the dealer network.

Mexico main market for exportsThe plant, which opened in 2009, has been increasing its export trade over the past few years since it began exports to South Africa in 2011. Since then, exports have expanded to more than 35 countries across Asia, Africa, North America and South America.

In 2015, just over 55% of the total production at the Chakan plant was for export markets, according to Dr Lauermann.

“In 2016, we expect it to stay around the same level,” he said. “In the mid-term, we would like to maintain a 50:50 balance between domestic and export production. After all, our primary focus at Volkswagen India is on the domestic market.”

Over the last two years, the top export market for the carmaker from India has been Mexico. The carmaker began exports of the Vento to Mexico in 2013 and according to Dr Lauermann more than 80% of VW India’s export production went to Mexico alone.

“The other export market that could turn out to be an important one for us is Argentina to which we started exporting towards the end of 2015,” he said.

In November last year, Volkswagen also began sending the Vento model made there via the port of Mumbai to Argentina, rebadged as a Polo. That followed the beginning of Vento exports to Mexico in 2013.