Volkswagen to start assembly in Algeria in Sovac joint venture 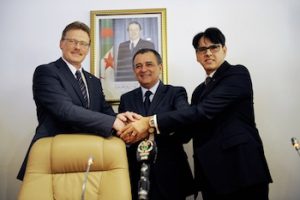 Pictured from left: Dr. Josef Baumert, member of the Volkswagen Commercial Vehicles board of management responsible for production and logistics; Abdesselam Bouchouareb, Algerian minister of industry; and Mourad Oulmi, CEO of Sovac

Volkswagen is setting up a joint venture with its local partner in Algeria for the assembly of VW, Seat and Skoda brands, including commercial vehicles.

Sovac has been VW’s import and sales partner in Algeria since 2001 and previously vehicles for that market have been imported as finished units from plants in Europe. With the set up of the joint venture – Sovac Production SPA – work has begun on an assembly building in the region of Relizane, west of Algiers. VW said the plant would be building up production capacity from the second quarter of 2017 to more than 100 vehicles a day. Those vehicles will include VW Golf, Seat Ibiza, Škoda Octavia and the Caddy from VW Commercial Vehicles.

"For us, local assembly is an effective way of starting production in Algeria,” said Andreas Lauenroth, head of foreign production for the VW brand. “We will be providing targeted training for local employees in quality, production and logistics at the European production facilities of our brands. This will enable us to reach ‘made in Europe’ quality standards in Algeria.”

The vehicles built at the Relizane facility are most likely to be assembled from complete knockdown (CKD) kits imported from Germany and Spain though further details on the delivery routes and partners have not so far been made available.

"The Volkswagen Group opted for participation in Sovac Production SPA as we have co-operated successfully with our sales partner Sovac for many years,” said Dr Josef Baumert, member of the Volkswagen Commercial Vehicles board of management responsible for production and logistics. “For us, this is a logical step towards increasing vehicle sales in Algeria in the long term."

The news comes after VW committed to production of the Polo Vivo in Kenya as part of strategy to expand its operations in Africa. That project is also being carried out in conjunction with its local import and sales partner, DT Dobie. Units of the Polo Vivo are being assembled from CKD kits at a plant operated by Kenya Vehicle Manufacturers from next year. The kits are being supplied from VW’s Uitenhage plant in South Africa.