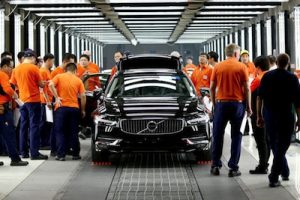 Volvo Cars is starting production of a number of new model series at its facilities in China as part of plans to increase production capacity there and turn China into its global manufacturing and export hub.

A spokesperson for the carmaker said it expected China to eventually account for between 30% and 40% of global Volvo production.

Chinese carmaker Geely bought Volvo Cars from Ford back in 2010.

Volvo Cars has already begun pre-production of the S90 series at its plant in Daqing (pictured) in northern China’s Heilongjiang province and full production will begin there before the end of the year.

The S90 is currently made at its Swedish plant in Torslanda, near Gothenburg, and production will continue there in addition to China in the short term. However, Volvo Cars plans to move production of the S90 in its entirety to the Daqing plant. Output from China will be both for the local market, which sells a long wheelbase version, and for export to the US, starting this year.

Volvo Cars has just unveiled a new China-built version of its S90 sedan and a specially upgraded luxury model called S90 Excellence. Those vehicles will be at the 2016 Guangzhou Motor Show this month (November 19th-27th). Both will be exported from China globally. Further details on the company’s transport strategy for those exports and projected export volumes for next year have not been revealed.

Volvo also said that full production of its 60 series medium-sized cars would move from Ghent, in Belgium, to its plant in Chengdu, which has been building 60 series vehicles since 2013. Both the premium S90 and the medium 60 series are based on the Volvo’s Scalable Product Architecture (SPA).

As with Torslanda, this does not mean the end of production at the Ghent plant, because Volvo will need all its current manufacturing sites as well as the additional capacity being created in China to meet its medium-term target of 800,000 car sales globally. But it does mean the end of SPA production there – the Ghent site will now be based on Volvo’s Compact Modular Architecture [CMA] production system.

“Ghent will play an integral part in the future global manufacturing footprint of Volvo Cars and Volvo has previously confirmed that the next-generation 40 series cars based on the CMA will be built in Ghent,” confirmed a spokesperson for the carmaker.

The smaller 40 series cars will also be made at a plant that is currently being built in Luqiao, 350km south of Shanghai.

“With three plants – and the designation of one car line for each plant – Volvo creates an efficient production structure ensuring future capacity for growth,” commented Håkan Samuelsson, president and chief executive, about the Chinese production plant set-up.

The Luqiao plant is owned by Chinese carmaker Geely but operated by Volvo. As reported last week, it will also make CMA-based cars for Lynk, Geely’s new car brand. The brand will share common production, distribution and service with Volvo Cars.