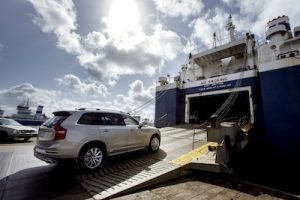 Sweden’s port of Gothenburg has reported a doubling in the number of Volvo vehicles exported during the past year. Between June 2015 and May this year, around 170,000 cars were sent out via the port.

Volvo’s global sales have reached record levels. The carmaker said 2015 was “a record-breaking year”, led by sales of the XC90 SUV, which is produced at the Torslanda plant. That growth has continued in the first half of 2016 with the carmaker posting growth of 10.5% compared to the same period last year, to 256,563 cars.

"Volvo has produced a highly successful range of models at the Torslanda plant in recent years, with the XC90 leading the way. And delivery to virtually every market takes place via the port here in Gothenburg nowadays," said Claes Sundmark, vice-president of container, ro-ro and rail at the port of Gothenburg.

China was Volvo’s largest single market in the first half with 40,688 cars sold, an increase of 6.3% year-on-year, driven by growing demand for the new XC90 as well as the locally produced XC60 and S60L sedan.

In the US, Volvo delivered close to 25% more cars over the first six months of this year, reaching 36,650 vehicles, again driven in large part by the XC90.

In Europe, sales rose by 10.3% to 138,851 cars as a result of strong performances in key markets such as Sweden, Germany, the UK and France. The XC60 was the best-sold model in the region, while the new XC90 also saw strong demand.

Volvo has just started making the new V90 estate at Torslanda (production began on June 22nd, just a few weeks after the new S90 saloon went into production), meaning all three of the new models in the 90 range – the S90, V90 and XC90 – are now produced there.

"It is extremely pleasing that Volvo Cars has decided to produce these particular models at Torslanda and that it is continuing its major investment offensive in Gothenburg. This is not only good for the port of Gothenburg but also for the region and the country as a whole," said Sundmark.