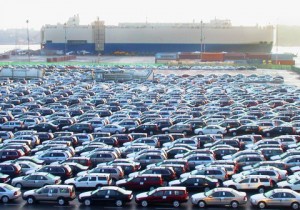 Volvo switches more exports to Gothenburg port
Volvo Cars has switched its vehicle exports from Sweden to Finland, Russia and China from the port of Wallhamn to the port of Gothenburg. The move consolidates Volvo’s exports from Gothenburg with an additional annual volume of 30,000 cars. Gothenburg is Volvo’s main export point and the new service means it will export vehicles per year from the Logent Ports & Terminals facility.

The extra volumes will boost exports from the port. Last year it handled more than 166,000 cars, a 1.6% increase on 2013. Of that number 88,789 were exports, a 6% drop on the previous year. A spokesperson for Volvo said that the total volumes out of Gothenburg will increase 50% this year compared to 2014.

“We are the largest export port in Sweden for cars and this new development has consolidated this position even further,” said Claes Sundmark, vice-president of sales and marketing at the port of Gothenburg. “It is particularly heartening that Volvo is choosing to continue to focus on its home port.”

Volvo said the decision to switch was part of its aim to improve its logistics network.

"We take a holistic look at costs, lead time and environmental impact," a spokesperson for Volvo. "The change from Wallhamn to Gothenburg gave opportunity to include other sea carriers and reduce the distance from our Torslanda factory to the port of exit."

Euro Marine Lines is forwarding the vehicles. To Finland and Russia the company will operate a weekly service calling at Hangö (Finland) – St Petersburg (Russia) – Newcastle (United Kingdom) – Zeebrugge (Belgium). The voyage to Russia will take approximately 3-4 days. It will tranship Volvo cars to the continent for onward shipment to China.

"EML is a new sea carrier for Volvo Cars, with a well-known owner structure and services that fit our needs and requirements," said Volvo's spokesperson. "The total number of cars with EML for 2015 will be approximately 30,000."