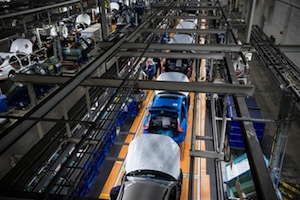 Volvo Cars has said it will shift production of the V60 from its plant in Torslanda, Sweden to the Ghent plant in Belgium.

The Ghent plant makes the V40, V40 Cross Country, XC60 and S60. The V60 shares parts with the latter two vehicles, which will make the transfer of the vehicle easier accommodate, while freeing up room at Torslanda for new models.

“We are…using the flexibility we have in our production system to free up capacity in Torslanda needed to meet demand for the new SPA-based 90-series cars,” said a spokesperson for Volvo Cars.

However, the company will still be making V60 bodies in Sweden and shipping them to Ghent for final assembly. Volvo would not disclose further details on the logistics underpinning the delivery of those bodies to Ghent as production is not due to begin until next year. It is likely however, that the carmaker will use its existing shortsea link between Gothenburg and Ghent operated by DFDS six times a week.