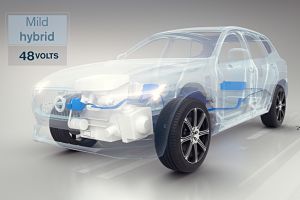 Geely-owned Volvo Cars has announced that all of the cars it launches from 2019 onwards will have an electric motor – a move it says marks the end of internal combustion engine-only cars.

The company said it would introduce a portfolio of electrified cars across its model range, with options for fully electric cars, plug-in hybrid cars and mild hybrid cars.

It plans to launch five fully electric vehicles between 2019 and 2021, three of which will be Volvo models with two from Polestar, Volvo Cars’ performance car arm.

These five cars will be supplemented by a range of petrol and diesel plug-in hybrid and mild hybrid 48 volt options on all models.

Earlier this month, the company said it would turn Polestar into a new, separately branded, global high-performance electrified car company.

Håkan Samuelsson, president and chief executive of Volvo Cars, said: “This announcement marks the end of the solely combustion engine-powered car. Volvo Cars has stated that it plans to have sold a total of 1m electrified cars by 2025. When we said it, we meant it. This is how we are going to do it.”

In response to questions at a press conference today, Samuelsson addressed the change in strategy, given his scepticism of electric vehicles a few years ago.

“We were sceptical about the cost level of batteries and the lack of infrastructure to charge an all-electric car,” he admitted. “We believe the plug-in technology is a very good bridge into the new world.”

He said battery costs had come down, there had been progress on charging infrastructure, and customers were now more interested in owning electric vehicles.

“We have come to the opinion that we need this faster than earlier and that is why we have announced five new [electric] cars for 2019,” he added.

Volvo’s first electric car will be based on the company’s CMA platform, built in China and sold globally. The company has yet to decide on a battery supplier.

Earlier this week, electric carmaker Tesla said it would deliver the first of its mass production Model 3 car to customers by the end of July.

Mercedes-Benz, meanwhile, says its first EQ series electric model will roll off the line at the Mercedes-Benz plant in Bremen at the end of the decade. The company said it expected electric vehicles to reach 15-25% of total unit sales for Mercedes-Benz by 2025.