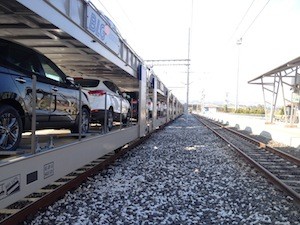 VTG Rail Logistics has signed a contract with BLG AutoRail that will build on vehicle transport services the two have been running between the Czech Republic and Belgium since December last year. All prior moves have been made on a pre-contract basis.

VTG is moving three trains a week each carrying 228 Hyundai vehicles on 19 bilevel car transporter wagons for BLG between Hyundai’s plant in Nosovice and the P&O car terminal at the Belgian port of Zeebrugge. BLG AutoRail is organising all rail specific parts of the transport for its customer Glovis. A spokesperson for BLG said that increasing volumes between Nosovice and Zeebrugge meant that the companies had to make frequent adaptions to the operation, something which influenced the preparation of the final contract.

“The logistics service provided by VTG Rail Logistics has impressed us due to its great flexibility, adherence to schedules and rapid turnaround times, resulting in a marked increase in efficiency,” explained Gerald Binz, managing partner of BLG AutoRail.

VTG stated that peaks in transport demand that were previously covered by truck transport can now be moved to rail because of the faster turnaround times on the service. The service can provide an additional train per week subject to peaks in demand according to the rail provider.

Currently the two companies are working on a further transport developments, including a ‘triangular’ solution to collect backhaul between Belgium and the Czech Republic. No further details are available at this time as the project is still under discussion.

VTG Rail Logistics is a subsidiary of VTG AG, one of Europe’s main railcar hire and logistics companies, with a fleet of 80,000 railcars. BLG AutoRail is the specialist vehicle transport branch of Germany’s BLG Logistics, which covers rail and truck movements, as well as providing car terminal services and technical support.