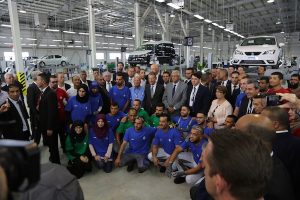 Following last November’s announcement that VW was setting up a joint venture with its local partner in Algeria, Sovac, for the assembly of VW Group vehicles, the two companies have held an inauguration of the plant in Relizane, 280km south of the capital Algiers.

VW will begin by supplying semi knockdown (SKD) kits from facilities across Europe for assembly at the plant, which has daily production capacity of 200 vehicles and will start by making the VW Golf, Seat Ibiza and Skoda Octavia. The plant will also make the VW Caddy van. A statement from VW said the VW Polo and Skoda Fabia would also be assembled there from next year.

While production will begin with prepared kits, Sovac’s CEO, Mourad Oulmi, said that working together with VW the joint venture would “create an industrial network which will not only include vehicle production but also a supplier structure meeting the requirements of local production”.

Algerian workers in production, logistics and quality assurance have been trained on site by experts from the VW Group, while managers were sent on a training programme for several months at various production locations.

There are currently more than 550 employees working at the plant but VW said that in the long term, this would grow to 1,800 and there would be additional jobs with suppliers and logistics service providers.

At the event to mark the inauguration of the plant, Seat’s executive committee chairman, Luca de Meo, said production in Algeria was a milestone for the brand.

“For the first time in the history of our brand, we are making cars outside Europe,” said de Meo. “One of our objectives is to make the brand more international and North Africa is an appropriate venue for this step.”

The Seat Ibiza is selling well in Algeria and de Meo went on to say that local assembly would help the company increase its sales. A spokesperson for the company said it would be the volume leader at the Algerian plant.

Sovac has been VW’s import and sales partner in Algeria since 2001. Previously, vehicles for that market have been imported as finished units from plants in Europe. In 2015, the Sovac Group dealerships handed over more than 30,000 Volkswagen Group vehicles to customers in Algeria.