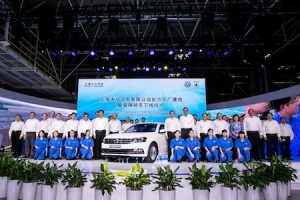 Volkswagen’s joint venture in China with SAIC – Shanghai VW –  has inaugurated its 20th facility in the country in the southern city of Changsha, a move that VW Group China’s president and CEO, Prof. Dr Jochem Heitzmann, said would improve the quality of the supply chain in the country, as well as bringing it nearer to its Chinese customers.

The carmaker is starting production at the $194m plant, in Hunan province, with the New Lavida; other VW Group and Skoda models are to follow according to VW. The investment is part of a wider €22 billion investment round VW is making in China between 2015 and 2019 of which €9.8 billion will be invested this year in the carmaker's two joint ventures in the country.

The Changsha plant will have total annual capacity for 300,000 vehicles and VW said it would create more than 4,000 new jobs, together with 4,000 more in the neighbouring supplier park. The company started work on the facility in May 2013.

In terms of improving the supply chain, VW said that the vicinity of the supplier park would optimize all logistic processes, providing short transport routes which would reduce costs and lower CO2 emissions. There are currently 20 suppliers at the part delivering 75% of vehicle content. Less than 1% of the parts volume is imported from abroad, according to VW and 99% comes from Chinese suppliers.

Similar cost and emissions savings were also to be had on the outbound side because of the vicinity the plant has to its dealer network in the south of the country said VW.

“We intend to develop the entire country as a company with local routes,” said Heitzmann. “The plant in Changsha is a key step in our ‘Go South’ strategy in China.”

VW said it intends to increase its plant capacity to 4m by 2018.