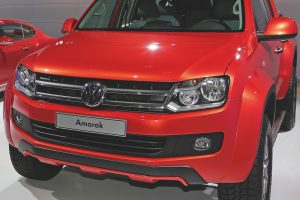 Volkswagen has sought to distance itself from reports that it has signed a new contract with Iranian commercial vehicle importer Khodro Sazi Sina (KSS) at the expense of its existing contract with rival company, Mammut Khodro.

A spokesperson for VW told Automotive Logistics the company was “monitoring and examining the development of the political and economic environment, and [was], therefore, in talks on various levels”.

While not expressly denying the deal, the VW spokesperson pointed to a report published last week in Iran’s English language daily news source, Financial Tribune, which quoted top executives at KSS saying the reports were “baseless”.

The first report appeared on Iran’s PressTV website and said KSS had gone through a “comprehensive restructuring [which] was significantly instrumental in its success to become VW’s representative in Iran”.

However, Mehdi Gharagozlu, a senior executive at KSS who was quoted in the more recent Financial Tribune report, said: “This is the first time I have heard about this.” He added that KSS had always had a commercial vehicle deal with VW which was ongoing.

Volkswagen said the Middle East was subject to the same evaluations for market opportunities as it conducted around the world.

The carmaker has also declined to confirm reports in January this year (by the Financial Tribune among others) about plans for joint venture production in Iran with Mammut Group. Neither would it confirm existing export volumes.

Volkswagen was among the carmakers that expressed an interest in renewed production in Iran when sanctions on the country were lifted at the beginning of last year. Volkswagen Group said it was conducting studies about a possible entry for the Volkswagen and Skoda brands to Iran and Audi told Automotive Logistics that it was already in talks with interested potential investors to evaluate a possible import business in Iran.

Continued political turmoil in the Middle East and North Africa, and plans by the Trump administration in the US to renew targeted sanctions against Iranian companies, are threatening to check the uplift in automotive trade and investment that followed the lifting of the original sanctions in 2016.