VW-FAW to build plants in Qingdao and Tianjin 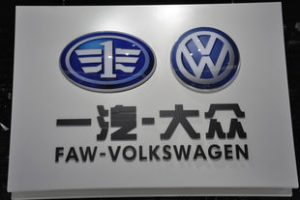 Volkswagen has announced plans to invest €2 billion ($2.7 billion) in two new plants in China with its local joint venture partner FAW. The plants will be located in the port cities of Qingdao and Tianjin on the east coast according to the carmaker.

VW said that key factors in choosing the sites were the infrastructure available and the high level of qualification amongst the labour force in the regions.

Tianjin is also the location of a new production plant for dual-clutch gearboxes that is due to be inaugurated at the end of 2014.

"China has become our largest and most important market,” said Prof. Dr Martin Winterkorn, chairman of the Board of Management of Volkswagen Aktiengesellschaft, who witnessed the signing of the declaration between the two companies. “To satisfy the demands of our customers in the country, we are engaging in a further substantial expansion of our capacities in China together with our Chinese partner FAW Volkswagen."

FAW-Volkswagen also has car plants in Changchun in the northeast of China, Foshan, in the south, and Chengdu in the west of the country. With the other joint venture involving SAIC – Shanghai Volkswagen – the group operates vehicle plants in Shanghai, Nanjing, Yizheng, Ningbo and Urumqi, and is constructing a new plant in Changsha, opening in 2015.

Volkswagen is now the leading automaker in China. Working with its joint venture partners. In the first five months of this year, they sold 1.5m Volkswagen, Audi and Skoda vehicles, up 18% year-on-year.

VW and its joint ventures will invest a total of €18.2 billion in new plants and products in China between 2014 and 2018. According to the company this amounts to the largest investment programme in the history of the Chinese automotive industry.