VW Group highlights gains from making Audi A1 in Spain 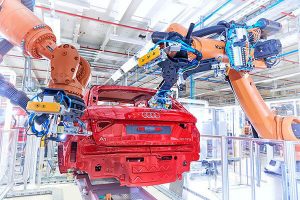 Volkswagen Group has said it expects substantial logistics benefits to follow, now that it is producing the new-look Audi A1 in Seat’s Martorell factory in Spain.

“[It] joins Seat vehicles in most distribution transport flows, which enables us to achieve cost and lead time synergies, both for Seat and Audi,” Seat spokesman Ezequiel Avilés told Automotive Logistics. “One example is the vehicle dispatch flow from Seat Martorell to the port of Barcelona, which is carried out using the Autometro rail service.”

Gains will also come from the A1 sharing the MQB A0 platform with Seat’s Ibiza and Arona models, which are also built at Martorell.

“This, of course, has generated synergies that are also passed on in terms of logistics,” said Avilés, adding: “This is very positive for the auxiliary industry in Spain, where the majority of the suppliers [for] these models are.”

The A1 will be made in two shifts on a revamped Line 3 at Martorell, and will contribute to maintaining high-volume output at the factory, Spain’s largest car plant, where more than 80% of output is exported – mainly to Germany, the UK, France and Italy. As the A1 will be made exclusively at Martorell, the sporty compact model will be distributed to all of its markets from the plant.

The updated A1 effectively replaces Audi’s Q3 on the Spanish factory’s production roster with assembly of a new-look Q3 moving to Györ in Hungary. Q3 assembly started at Martorell in mid-2011 and almost 800,000 units were manufactured there until production ended last July.

The previous generation of A1 was made in Brussels, and allocation of what is the second premium model made in Spain is “acknowledgement of the excellent work carried out by the Seat Martorell team on the production of the Audi Q3 in recent years,” said Christian Vollmer, Seat’s vice-president for production and logistics.

“The Audi A1 will be made under the highest quality standards, confirming the Audi Group’s commitment to the Martorell factory as a strategic production location for the Volkswagen Group’s global network,” he added.

The plant built 455,000 cars last year, comprising the Q3, Ibiza, Arona and Leon. This year, the figure is expected to be higher, said Avilés. That expectation has led to more than 500 workers being recruited to full-time jobs at Martorell this year.