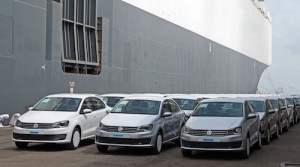 Volkswagen has announced that it has begun exports of the Vento model made at its Chakan plant near Pune, India, to Argentina, where it is being rebadged for sale as a Polo. The vehicle was launched in Argentina on November 10th and so far VW has exported 1,600 vehicles to Argentina through the port of Mumbai.

“Volkswagen India builds highest quality cars at its Pune Plant,” said Dr Andreas Lauermann, president and managing director, Volkswagen India. “We have been exporting to numerous markets across the continents of Asia, Africa and North America. By entering Argentina, we not only now continue our endeavour to deliver top notch products around the world, but also establish ourselves in a new region and a market which has a strong Volkswagen presence.”

The carmaker started exporting cars from its Pune plant in 2011 to South Africa. Since then exports have expanded to more than 35 countries across Asia, Africa, North America and South America. It made its first exports of the Vento to Mexico in 2013.

The Volkswagen Pune Plant has produced over 156,000 cars for export to date.

Volkswagen India also exports parts and components of its cars to Malaysia which are assembled there for the Malaysian domestic market. Volkswagen works with Schnellecke Jeena for logistics support in the supply of parts from Pune to Malaysia.

Volkswagen Argentina will sell the car built at Pune Plant as the Polo with a 1.6-litre MPI petrol engine with five-speed manual, as well as a 6-speed automatic gearbox.

Volkswagen said that it currently had a market share of almost 22% in Argentina.

The consignment of 1,200 finished vehicles was delivered from South America for distribution within Mexico. A spokesperson for VW Mexico said the shipment was a one-off delivery and was made because the port of Veracruz was full.

The port also received a second consignment of finished vehicles on November 14th, also inbound from South America. This consisted of 1,670 units, which were conveyed by the Victory Leader, belonging to NYK, and also unloaded at ATP.

Both operations were coordinated by Amports, which specialises in the processing and storage of finished vehicles.

In the first three quarters of this year, Altamira handled almost 62,000 finished vehicles, up 7.9% on the first nine months of 2014, according to Ministry of Transport and Communications. For October, the projection was for a cumulative increase of 5% on the year to almost 68,850 units.

India's increasing status as a base for export manufacturing will be just one of the subjects under discussion at the forthcoming Automotive Logistics India conference which takes place in Delhi next month. Find out more and register here

Barry Cross contributed to this report