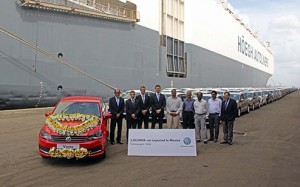 Volkswagen’s division in India has shipped its 100,000th car to Mexico in fewer than two years since it started exports from its facility in Chakan, near Pune, via the port of Mumbai. The milestone vehicle was a red VW Vento, which was loaded as part of a consignment aboard the Höegh Asia, which is expected to arrive in the first week of October.

Nearly every second car produced last year at the Volkswagen plant in Pune was shipped to Mexico – its single biggest export market – and the Vento became one of the top three selling passenger cars in Mexico in the first half of this year, according to VW. The VW Polo is also exported to Mexico from the Pune plant.

“The primary focus of the company has been on the domestic market in India,” said Carsten Goransch executive director, logistics, Volkswagen India. “However, with the decision to enter export markets, we have put our operations here in India on a broader and economically sustainable base.” He added that the sales success in Mexico of Indian built vehicles meant that VW could further increase the scope of its exports to other countries in the near future.”

Currently Volkswagen India exports the Volkswagen Polo and Vento in right- and left-hand drive versions to more than 32 countries in Asia, Africa and North America. It started exports to South Africa in 2011.

The Vento replaced the Jetta Classico on the Mexican market at the end of 2013.

According to a recent report in The Economic Times of India, Mexico is expected to become the biggest export market for Indian carmakers between this year and 2016, overtaking South Africa. Exports, led by VW and GM, are expected to increase over that period to 132,000 from 82,000 over the same period last year.