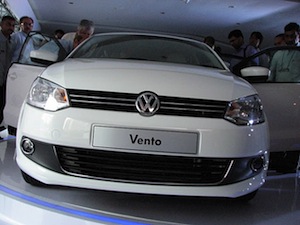 Volkswagen India has made its first delivery to Mexico of Vento exports, produced at the carmaker’s Chakan plant near Pune. The carmaker said that Mexico would become the largest export market for its Indian production, with every second car produced at the Pune plant for export being sold there.

As well as the Vento, the VW plant in Pune – which opened in 2009 – makes the VW Polo as well as the Skoda Fabia and Rapid models. It started exports from the plant in 2011 to South Africa. It now exports the Vento in both right- and left-hand-drive versions, as well as right-hand-drive Polos. Up to the end of October this year the total number of units exported from Pune has reached more than 27,000 and currently 20% of the vehicles produced at the plant are for export. Output at the plant hit 96,000 in 2012.

VW did not confirm which Indian port it was using for the export of the Vento to Mexico. The port of Mumbai is the closest, but suffers infrastructure constraints and a lack of dedicated ro-ro facilities. The company is reported to be looking at the port of Ennore, not far from Chennai, for exports.