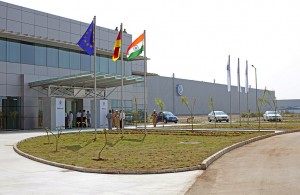 Volkswagen is reported to be investing $250m in its operations in India to increase the level of localisation to 90%. It currently stands at between 65-70%. The plan, which will be put into effect over the next five to six years, includes local production of engines as the company strives to consolidate its position in the country. Currently VW imports 100% of the engines it puts into vehicles produced in India.

"India is a strategic market for us and we are looking at investing here in a systematic manner,” Mahesh Kodumudi, CEO and president of VW India, told local news sources. “Over the period of next five to six years we intend to invest Rs 1,500 crore ($250m) on activities like enhancing localisation and new products.”

While no decision has been made on a location for engine production, Kodumundi told reporters that the company’s first choice would be the western region of Maharashtra, India’s most industrialised state.

Volkswagen India has been increasing its local parts sourcing in the country over the last year. Speaking at last December’s Automotive Logistics India conference in Pune, Sven Bockes, head of disposition logistics, said the supply chain for the carmaker’s Pune plant is now 79% localised in India, with 11% of parts coming from China and 10% from the rest of the world. The carmaker imports more than 1,800 CKD parts.

At the same time that it is increasing localisation the company said it is looking at opening up plant capacity to meet future growth needs.

VW’s efforts to strengthen its position in the Indian market is backed up by its launch of a newer version of its premium Polo hatchback, which will compete in the small car segment, a segment which accounts for the majority of sales in the country. The new Polo will begin retailing at 499,000 rupees ($8,300). VW makes the Polo at its plant in Pune alongside the VW Vento and the Skoda Rapid. In 2013, about 100,000 vehicles were produced at the plant.