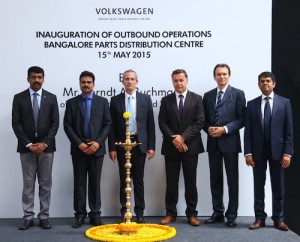 Volkswagen has opened a regional parts distribution centre (PDC) in Bangalore that will serve 67 dealerships in the southern states with a one-day delivery time.

The carmaker has invested $4.7m in the 5,000 sq.m facility, which was built in 10 months. It is working with logistics provider Kuehne + Nagle India on the management of the facility.

“Our new PDC in Bangalore is strategically important for us as South India contributes to around 30% of parts sales in the country,” said Berndt Buchmann, director of group after sales and vehicle logistics, VW Group Sales India. “With this facility in Bangalore we will be able to increase the efficiency of our aftersales to improve the delivery of urgent spare parts to our dealers within 24 hours and, furthermore, to take the quality of service to our customers to a new level.”

According to VW the PDC is central to its Depot Network Development Project in India and is the second facility following the regional PDC established in Gurgaon in 2012.

It will serve dealers and authorised service centres across the states of Karnataka, Andhra Pradesh, Tamil Nadu, Telangana, Goa and Kerala with parts for all available models sold by Volkswagen Group brands in India. Those include Audi, Lamborghini, Porsche, Skoda and Volkswagen.

VW said the facility would employ 80 people and would be equipped with the latest material and IT equipment, as well as a rain harvesting system, an efficient ventilation system and fire protection infrastructure.

“When we built the new PDC our focus was not only on improving our productivity but also on providing the highest level of safety, as well as environmentally friendly operations at the workplace,” said Buchmann.

At the inauguration of the PDC held last week Buchmann was joined by Thierry Lespiaucq, managing director of VW Group Sales India and Vinod Prakash Shivhare, head of Group Parts Logistics, along with other senior officials.