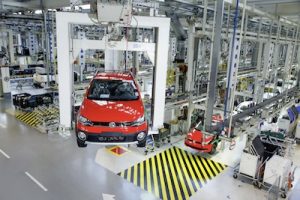 Volkswagen is accelerating its production in Brazil to 50,000 vehicles a month, following a widespread shutdown across its four plants in the country because of a parts supply problem. The stoppage is thought to be related to seat supplier Keiper, owned by Prevent DEV Group, though Volkswagen do Brasil (VW do Brasil) would not confirm this.

In August this year, output at six Volkswagen plants in Germany was disrupted because of a dispute the carmaker had with suppliers ES Automobilguss and Car Trim, two more suppliers in the Prevent DEV Group.

In Brazil, between August and September, VW faced stoppages at its four plants in Taubaté, São Jose dos Pinhais (Curatiba), São Carlos (which makes engines) and Anchieta. Some production was resumed in mid-September at the first three plants and on September 20th at Anchieta. However, the carmaker has some lost ground to make up, even in the enervated Brazilian market. A spokesperson for VW do Brasil said this week that it was now working to resume full production and that it would be “normalised” over the next few weeks.

“Volkswagen plans to accelerate production to a volume of 50,000 cars per month in October and November, refilling its dealership network across the country and returning to offer the most complete portfolio of products to Brazilian consumers, besides meeting the demands of exports.”

The carmaker had a total annual output of 423,000 vehicles in 2015 (less than half what it was making in 2012), along with 478,000 engines. Of the assembly plants, Anchieta makes the Gol, Jetta and Saveiro (including the Saveiro Cross). Taubaté also makes the popular Gol model, along with the Voyage. It also makes the up! and cross up! city cars. São Jose dos Pinhais makes the Fox, CrossFox, SpaceFox, Golf and Audi A3. It also plans to make the Audi Q3 SUV this year.

VW do Brasil has the largest dealership network in the country, numbering around 600 and employing 20,300 staff. The network also distributes imported models such as the Golf Variant, Tiguan, Touareg and Amarok.

The Brazil plants also produce vehicles for export; in 2015, VW reported being the largest automotive exporter from Brazil. Last year, it exported almost 125,000 vehicles to 16 markets, up 35% on the previous year and higher than the overall export growth rate in the country of just under 25%, according to figures from the national automotive industry association, Anfavea.

The supply chain and logistics issues currently affecting carmakers and their suppliers in South America will be under discussion at the Automotive Logistics South America conference, which takes place in São Paulo, Brazil on December 6th this year.