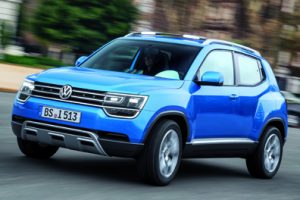 Volkswagen has started production of the Taigun subcompact SUV at its AutoEuropa plant in Palmela, Portugal.

The carmaker announced last year that its was “significantly expanding” its range of SUVs in a variety of classes and the Taigun, which until now was reported to be in the development phase, is described as “a compact model in the lower price segment”.

The last time the vehicle was seen was at the New Delhi Motor Show in India three years ago (following its debut in Brazil in 2012), though rumours of it being made at the AutoEuropa plant have been circulating in the Portuguese motor press.

Short-sea operator, Neptune Lines, has added the port of Setubal, near the Palmela plant, to its Atlantic-Black Sea route, following a new contract with Volkswagen to the move the Taigun from there to the port of Civitavecchia, in Italy. The company’s commercial director, Peter Menzel, said it would be making two sailings a month between Setubal and Civitavecchia.

Neptune Lines would not disclose the number of Taigun units it would be carrying, though Menzel said it would start low and rise steadily once production of the new model was fully up and running.

Neptune Lines provides direct connections on the route between Setubal, Morocco, Italy, Turkey and the Black Sea, as well as short transit times out of Italy to Turkey and Romania.

The company said that in addition to these advantages, the new set-up would ensure faster transit times to Israel, Egypt and Lebanon via its hub in the Greek port of Piraeus.