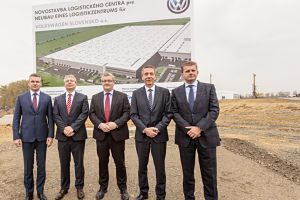 “The new logistics centre will help us to be closer to production; logistics costs will be lower and logistics [paths] will be shorter,” a local company spokesman told Automotive Logistics, adding: “We expect a positive influence on truck traffic in the part of the city where Volkswagen Slovakia operates.”

The adjacent Slovakia plant produces vehicles for five of the group’s car brands under one roof ­– VW, Porsche, Audi, Škoda and Seat.

Last year, as part of a €600m investment, the facility initiated production of a new bodywork operation for the Audi Q7 with up-to-date fastening and automation technologies.

Since 1991, Volkswagen has produced more than 4m vehicles and 6.8m transmissions in the eastern European country. It employs over 10,800 people there.

The logistics centre will be operated by an external logistics provider, who will be chosen in coming months.

In August, the group officially opened a new group consolidation centre near Bratislava to handle inbound goods for 28 production plants across Europe.