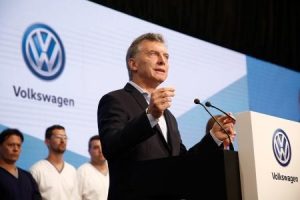 Volkswagen has announced plans to invest €560m ($660m) in its Pacheco plant in Argentina over the next five years, as it prepares it for 2020 production of a new SUV targeting the South American market.

The new vehicle project will create 2,500 jobs at the plant, which was first opened in 1995.

The design, size and equipment of the SUV will be based on the Modular Transverse Toolkit (MQB) technology, according to the company.

The Volkswagen brand plans to launch 20 new models in the region based on the MQB technology by 2020.

The company said the decision formed part its Transform 2025+ strategy, which includes the biggest model offensive in its history and the regionalisation of its business.

The company said it was increasingly delegating responsibilities previously held centrally in Wolfsburg to the regions.

“Going forward, the regions will hold full responsibility for the entire scope of business activities – right through to decisions relating to the model range,” it added.

The region has been staging something of a recovery this year, after several years of decline. A Scotia report recently pointed out that the South America was leading the way in global sales growth this year, up 14% year-on-year by the end of August.

According to LMC Automotive, vehicle sales in Brazil exceeded 2.3m units a year for the third consecutive month in October. Sales increased by nearly 27% in October year-on-year and have risen 9.7% so far this year.

“The sharp declines in inflation and interest rates, as well as a nascent recovery in the job market, are helping to boost consumer confidence and spending,” said LMC in a note.

After a marked slowdown in September, Argentina’s sales rate accelerated to 844,000 units a year in October, with sales up 27% year-to-date.

VW said it, too, had been experiencing a boost in sales in the region, with 36,000 vehicles handed over to customers in October, a 60% increase over the same month a year earlier.

“Key drivers behind this positive development are Brazil and Argentina. Growth in the small car segment, which includes the Gol and Voyage, in these markets is particularly strong,” said the company.

The Volkswagen investment news follows a General Motors announcement in October that it would spend $500m at its Alvear plant in Sante Fe, Argentina, to develop manufacturing facilities for a new Chevrolet-branded model from 2020.

Meanwhile, in September, Volkswagen Commercial Vehicles said FISUM, its local contract partner in Ecuador, had started production of the new Amarok pick-up truck model at a facility in Quito. The complete knock down (CKD) parts for production are being sourced from Argentina and Germany.

More information on the state of the South American automotive market will be made available at this month's Automotive Logistics South America summit, taking place on November 28th in São Paulo.