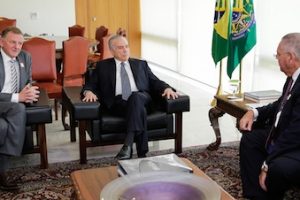 Volkswagen’s truck and bus division in Brazil – Volkswagen Caminhões e Ônibus (VWCO) – is to invest €420m ($446m) in its business in Brazil over the next five years, the biggest single funding package the company has made. The investment will include modernisation of its plant in Resende, the “steady renewal” of its product portfolio and the development of its connectivity services.

“The new investment cycle will bring renewal for this line, especially in the Volkswagen products,” a spokesman for VW Truck & Bus told Automotive Logistics. “Today [that] comprises the Delivery, the Worker and the Constellation truck families, plus the Volksbus bus chassis line.”

This is the first ‘family launch’ of VW commercial products in Brazil since 2005, when the Constellation and Delivery trucks were introduced. In the interim, derivative models have been launched tailored to market niches, according to the company.

Commercial barometerThe investment is welcome news for the Brazilian vehicle market, which, like the economy more generally, is in a slump.

The most recent public forecast from Anfavea, the vehicle makers’ association in Brazil, shows a 25.4% decrease in licensed heavy commercial vehicle sales in the region and only a marginal increase (1%) in exports.

MAN Latin America recorded an operating loss of €120m last year because of the lower volumes in Brazil.

However, Roberto Cortes, CEO of VWCO, sees light at the end of the tunnel, although he stated that because of a gradual economic resurgence, full recovery for the Brazilian truck and bus market would not be likely before 2022.

VWCO has recognised that the Brazilian economy is facing hard times and that truck and bus fleet owners are heavily affected by this. Cortes has said the commercial vehicle industry is a good barometer of Brazil’s economy and suggested there were now signs of recovery. According to the company, these include rises in the business confidence index development, in the country risk index development (especially compared to other emerging countries), and in Brazil’s Bovespa stock market index.

“This is why VW Truck & Bus, and its brand VWCO, decided to invest in a new investment cycle – the fifth consecutive in the Brazilian operations in the last 20 years,” said the spokesman for VW Truck & Bus.

Andreas Renschler, CEO of Volkswagen Truck & Bus and VW’s management board member for commercial vehicle activities, said he could also see the light.

“We believe – despite the current market situation – that Brazil is an important market for trucks and buses,” said Renschler. “It has always been a key market for the German industry and it will be again. I am confident that the Brazilian economy has bottomed out and will recover again in the next few years. In order to be prepared for this, we are now taking money into our hands to be able to continue to offer excellent products and state-of-the-art production. The entire Latin America region plays a major role in our growth strategy.”

Plant investmentIn terms of modernising the Resende plant, VW Truck and Bus is buying new equipment for the whole assembly line. On top of that, the company is investing in its people with technical training.

The Resende plant is run as a ‘modular consortium’ of seven companies and VW is only involved in supplying the factory and inspection at the end of production. The companies that carry out product assembly in Resende are: Maxion (chassis), Meritor (axles and suspension), Remon (wheels and tyres), Powertrain (engines and transmission), AKC (body shop), Carese (paint shop) and Continental (cab trimming). VWCO remains responsible for quality assurance, sales and aftersales services.

According to Cortes, that consortium set-up has been to the plant’s advantage during the tough economic climate affecting Brazil.

“We have been selling Volkswagen-branded trucks and buses for 35 years and our plant in Resende has been around for 20 years,” he said. “It is only through our innovative production concept, which sees us work together under one roof with seven partner firms, that we have been able to join forces to take the necessary action to overcome the current crisis and equip ourselves to deal with an upturn that is sure to come.”

Telematics toolsIn terms of investment in connectivity services, VWCO has recently expanded the functionality of its Volksnet and MAN Guard systems. It has introduced a telematics system for fleet management, monitoring and vehicle tracking, which has been specially developed for Volkswagen and MAN models. Volksnet and MAN Guard are integrated tools geared towards boosting productivity and reducing costs.

“Initial tests have recorded savings of up to 20%,” said the VW Truck & Bus spokesman. “The system also helps to control emissions, a subject of fundamental global importance. For the coming years, the aim is to expand services even more.”

One of the main innovations of the telematics system, he added, was that the company was informed of the truck’s efficiency in real time, either on a vehicle-by-vehicle basis or across the entire fleet. This even takes into account the run times of the air conditioning system, slow-moving traffic and more significant contraventions during the journey.

Renschler recently joined Cortes to brief President Michel Temer on the truckmaker’s planned investments in Brazil. “German companies think long-term,” said Renschler at the meeting. “We might not be the first ones to venture into new markets. But wherever we are, we persevere in difficult times too.

“Brazil, in particular, is a country with which we enjoy very successful business relations that go back decades and that will continue for a long time yet,” he added. “That is why we are strengthening our commitment at Volkswagen Caminhões e Ônibus further.”

Read more about the current challenges and opportunities in the Brazilian automotive market in the Automotive Logistics South America summit report.