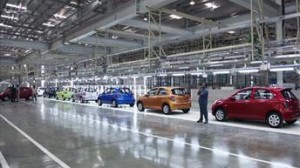 Production at two plants operated by Toyota’s joint venture business in India – Toyota Kirloskar Motor – has been brought to a standstill following a dispute over wages that has resulted in a lockout at both facilities. The plants, located in Bidadi, just outside Bangalore in the south of the country, have been hit by disruption for the last 25 days, according to the carmaker.

“[U]nder the instigation of the union, certain sections of the employees have resorted to deliberate stoppages of the production line, abuse and threatening of supervisors thereby continuously disrupting business for the past 25 days,” said the company in a statement, adding that it was left with no other option but to declare a lockout of the premises to ensure the safety of its workers and management personnel.”

The TKM Employees union has responded stating that the company has acted illegally in not issuing a 14-day notice ahead of the lockout. Its president Prasanna Kumar even suggested to India Today that the carmaker may have closed the plant to reduce production and lower inventory, which he said has been increasing due to declining sales.

"Our aim is to lift the lockout at the earliest, provided we are convinced that employees will not engage in any act of sabotage or frivolous activity that will disrupt production, Shekar Viswanathan, vice chairman and Whole Time director at TKM, told Automotive Logistics.

The wage dispute between the carmaker and its workers has been rumbling on for 10 months following a demand for Rs. 8,000 for the fiscal year from the employees union, which cites the rise in the costs of living and increased work load. Toyota Kirloskar management responded with an offer of Rs. 3,050.

Combined annual production capacity at the plants stands at 310,000, and the company said that the disruption over the last 25 days has cost it 2,000 vehicles in lost output.