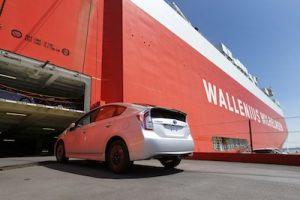 Scandinavian finished vehicle and breakbulk shipping lines Wallenius and Wilhelmsen have signed an agreement to establish a new ownership structure for their three jointly owned companies.

The establishment of WWL ASA will involve both parties merging ownership of the majority of their vessels and other affected assets and liabilities into the new entity in a move expected to improve tonnage optimisation and planning. The companies are targeting savings of $50m-100m through the synergies achieved.

Wallenius and Wilhelmsen each have a 50% stake in WWL and ARC with a 40% stake in Eukor. Hyundai and Kia, who own the other 20% of Eukor, will retain their stake in it.

The transaction is expected to be completed in the first quarter of 2017 and Craig Jasienski, currently CEO of Eukor, will head the new entity. In the interim, Jasienski has immediately taken over as joint chief executive for WWL and Eukor, replacing Chris Connor, who has led WWL since 2013, and is taking on a new role focusing on the joint companies land-based services.

“It’s all about creating a more efficient and agile shipping and logistics company that can thrive in the dynamic and competitive market we have today,” said Anna Larsson, global head of sustainability at WWL, speaking on behalf of the President's Office. “Wallenius and Wilhelmsen wish to continue to be a world-leading player within the car and ro-ro segments and grow the businesses to serve our customers,” added Larsson.

The latest announcement will have no immediate effect on existing organisational structures in WWL, according to Larsson. Back in 2014 WWL restructured its global organisation from four geographical business units into two market performance areas (MPAs): Atlantic and Asia Pacific.

Asked whether there would be any reductions in assets or staffing, Larsson was more circumspect.

“This is the start of developing a new shipping and logistics platform,” she said. “Exactly how it will be structured and what assets will be needed in its operations is an assignment for the new CEO and is still to be determined. The management teams of WWL and Eukor have been tasked to find synergies. There is a lot to be gained just by working closer together, but it may lead to changes in both companies’ organisations.”

If redundancies do result, it won’t be for the first time at WWL: last year, the firm’s then president and CEO, Chris Connor, revealed that changing global shipping patterns had led it to shed 18% of its ocean division’s staff over the past few years.

Developments on landUnder the latest restructure, Connor has been moved from his role as WWL president and CEO to the role of chairman of WW Land Based Holdings, as part of a push to grow the firm’s land operations, including port and plant based vehicle processing for autos and heavy equipment, marine terminals and inland transport.

This part of the business has grown strongly over recent years, according to WWL, developing into a billion-dollar, global operation.

“We’ve experienced rapid growth in the land-based arena over the last decade,” confirmed Connor. “The strategic review process will get us ready to continue that pace over the next decade.”

Most recently, WWL announced it was adding eight hectares of newly developed land to its vehicle services operations (WWL Atlantic Vehicle Processors) at the US port of Brunswick. Once completed, the company’s footprint at the port will cover 36.5 hectares on the Colonel’s Island ro-ro terminal.