Weak yen not the only reason for Japanese export growth 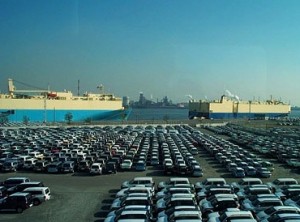 The weakening yen has helped stimulate a growth in automotive-related exports from Japan to the US along with other markets. In terms of finished vehicle exports to the US, the country saw a rise of 6.4% in December compared to the same month in 2013, reaching almost 152,760 units, according to figures from the Japan Automobile Manufacturers Association (JAMA).

Total vehicle exports from Japan in December reached more than 381,100 stated JAMA, a more modest 0.5% increase following four months of downturn. That rise was helped by rises in exports to Africa and the Middle East, led by truck and bus units.

Carmakers in Japan are taking advantage of the currency situation though they reaffirm that local production remains the main order of doing business and that the rise in exports is also related to other factors.

“The favorable environment due to the weakening yen is enabling Nissan to consider many possibilities,” a spokesperson for the carmaker told Automotive Logistics. “For instance, the high demand for the Nissan Rogue crossover in the US, which exceeds current production capacity at our Smyrna plant in Tennessee, raises the possibility of using production capacity in Japan to support sales of Rogue.”

However, the spokesperson added that Nissan would not change its overall strategy to localise production as much as possible.

“Nissan strives to produce cars where they are sold to respond efficiently to customer demand,” he said.

Meanwhile, Toyota said that December was the first time in three months that its vehicle export figure from Japan had increased, compared to the same month of previous year. Total exports were 152,000 units, up 4.1% from December 2013, due to increased exports to North America, Oceania, the Middle East, and Africa.

However, the carmaker was keen to add that this was less to do with the yen’s depreciation and more to do with other factors, mainly an increased demand for SUVs in the US and the launch of some Japan-produced models, such as Lexus NX.

Exports to the US increased as a result of strong sales of vehicles such as the RAV4 because of the stabilisation of gasoline prices, according to Toyota.

“We believe that we should not have long-term production/export policy based on exchange rate values (which fluctuate all the time), but instead have a balanced production organisation that enables us to compensate FX rate fluctuations,” said a spokesperson for the carmaker.